Pull off those high slits worry-free.

There are many different kinds of the naked dress. There's the flesh-toned one (see: Carrie's bus ad on Sex and the City), there's the see-through one, and there's the one that boasts a slit so high, it's cause for alarm. All different, yet the idea is one and the same — to project the idea of nakedness without actually being naked. A fashion risk without the risk. KIDDING — there is a risk, which is the whole point of this article.

So how do the stars do it? What sartorial sorcery occurs behind the scenes that allows them to wear these incredible non-naked naked dresses without suffering a catastrophic wardrobe mishap? The answer: a fantastic, well-prepared power stylist. We called upon Dani Michelle, who's responsible for Bella Thorne's sexy Critics' Choice Awards look (above, left) and asked her to spill the secrets on how to wear a naked dress—specifically, a high-slit naked dress—without any mortifying consequences.

"The dress should be tailored to your body, so when you move in different ways, it won't create ripples, letting people see through at different angles," Michelle says. "You don't want any extra spaces for the dress to move or lift up." She uses Thorne's dress as an example: "It was so painted on to her body that there wasn't any air or room for it to move in any way."

"It's not just about using a lot of fashion tape, but about taping it in the right places," she says. "I always tape about an inch or more away from the edge, because you want your clothes to lay effortlessly on the skin and move naturally. By taping it further in, the garment stays put, and the natural edge still has slight movement."

Yes, this is a real thing. "For extra protection, wear a strapless panty (or a nipple cover if you're wearing a plunge-neck top), so if God forbid, there's an unexpected gust of wind, you're not exposed. I use Shibue, a strapless underwear that goes from the front to back with no sides," Michelle says. "It's kind of like a pasty, but it's really nice, high quality underwear—and it's washable, reusable, and affordable."

Charlize Theron in Dior with jewelry by Harry Winston at the Academy Awards. Jordan Strauss/Invision/AP 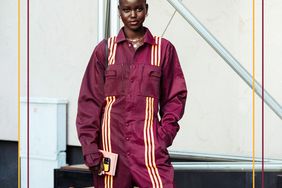