If you have the sudden urge to shop Gucci bags on resale sites, well, good luck.

"There's no such thing as bad publicity," say people who have never been called a "girl boss" on Twitter. In some cases, though, it might be true — especially when it comes to Hollywood name-drops. Witness "The House of Gucci Effect," which starts with a campy, vampy movie about Italian glamour and easy murder that's been lauded as "wildly entertaining" and panned as "proficient and shameless." Also: really fun for Lady Gaga, who stars as a '70s Italian heiress with killer style, a big accent, and designer weapons.

It's a goofy movie that makes the Gucci family look really bad — so bad they're threatening a lawsuit — but guess what? It's also making Gucci merchandise skyrocket on resale platforms and fly off pre-holiday shelves… which is funny, because it's not like the brand needed any more help after being Embraced by some of the culture's coolest people (including Harry Styles, who wore the label almost exclusively on his latest tour which was a notably well dressed one).

What's even more fun about the whole movie-to-handbag frenzy, at least for fashion junkies, is that House of Gucci and the house of Gucci aren't related — at least not officially. The movie was directed by Gladiator's Ridley Scott, and comes stuffed with the same opulent view of Mediterranean blood sport, but with poison and purses instead of hungry lions. But for a film with no official support from the fashion brand, there's some sneaky overlap happening with its megawatt cast. That includes Salma Hayek, who's married to Gucci's current owner Francois-Henri Pinault, and Jared Leto, who's besties with current Gucci designer Alessandro Michele and frequently models for the label.

Perhaps that's because the brand was savvy enough to know that a movie, no matter how silly, would only burnish their mystique. The Business of Fashion reports "since September, House of Gucci has sparked over 25,000 posts across news and social media, garnering online visibility worth an estimated $104 million" — and outpacing social media shoutouts of the brand's own November fashion show by 300%.

Demand for the product has risen accordingly, with a rep from luxury resale site 1stDibs reporting the site "has seen an increase of 30% in orders for Gucci items" and "daily searches for the term 'Gucci' have risen 25% since the movie release." Vestiaire Collective says they're getting 40% more clicks on Gucci bags — an especially fun tidbit, since Gucci and Vestiaire are both funded by Kering, aka the luxury goods firm owned by the aforementioned Mr. Salma Hayek. (Celebs, they are not just like us.) The online search engine ShopStyle — aka the place where you can find 100 lace black dresses in your size within five seconds — just reported a 73% jump in Gucci belt searches, which is wild because if low-rise jeans really are back (shudder), nobody will see your belt at all.

In fact if you have one lying around, this all suggests it might be time to sell. It's a Gucci frenzy out there, sweetie.

To be fair, though the movie has put the Gucci name on blast, the brand also continued its own parade of jaw-droppers, including a show on the Hollywood Walk of Fame that drew Gwyneth Paltrow, Serena Williams, and (yep) Mr. Leto, along with a "hack" that merged its logo with Balenciaga's for a limited-edition collection (including crystal-encrusted boot-pants most recently seen on Beyoncé). Gucci continued its sponsorship of the decadent-but-somehow-still-cool LACMA Gala, which brought A-Listers like Billie Eilish, Elle Fanning, and Leonardo DiCaprio onto the Gucci-branded red carpet, along with cultural titans like Steven Spielberg and Barbara Kruger. Last week in Miami, a cocktail party at the Gucci boutique drew next-gen stars like Selah Marley and Larsen Thompson, along with hot hot hot artists like Chloe Wise, who wore the same Gucci-branded corset as Dakota Johnson during the New York Film Festival. (It looked equally must-have on the painter.)

Still, one can't deny the free name recognition that comes from stars like Lady Gaga and Adam Driver (who is, ironically, the current face of Burberry, but still gets name-checked with the G-word because of this film), along with the prominent placement of a hundred Hollywood marquees. (As a teenager I know said when I asked her about the movie and if its story tarnished her view of the brand at all, "All fashion history is problematic in some way. I still want the sunglasses.")

If you prefer something besides the sunglasses, it's hard to go wrong with Gucci's famous Disco Bag, bejeweled biker boots, or a lipstick in a dainty floral case. Each has an echo of the movie's bloody brilliance, but instead of slaying a cranky husband, they'll merely slay your Instagram feed.

Gucci 25* Goldie Red
Was this page helpful?
Thanks for your feedback!
Tell us why!
Related Articles 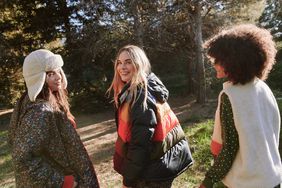