With Memorial Day weekend upon us, we'll take a six-pack, please! This summer is bound to give us another peek at the sexiest abs in Hollywood, which is why we're getting ready by gathering all of the hottest of years past in one place. On our list: Tom Brady, Liam Hemsworth, Orlando Bloom, and Kellan Lutz. Click through the comprehensive gallery of all the rippling, glistening abdominal muscles you can handle—we just hope you have air-conditioning.

Before he was an Oscar-nominated actor, Mark Wahlberg made a splash with his 1992 Calvin Klein campaign (alongside Kate Moss).

In the caption to this mirror selfie, Brown says his 27-year-old Predator co-star Trevante Rhodes "reminds me every day that I'm 40 years old." Age is just a number, Sterling!

The Hollywood hunk showed off his rippling pectoral muscles and his perfectly chiseled abs in black boardshorts while on Bondi Beach in Sydney, Australia.

The actor posed in nothing but a pair of tiny black shorts as he flexed his bicep and showed off his rock-hard physique in an Instagram post.

The Legend of Tarzan actor's body has arguably always been pretty incredible, but his gravity-defying six-pack for the anticipated live-action reboot is taking it to a whole new level with the latest promo photo from the film.

Calvin Harris took to Instagram to share a sexy shirtless photo of himself that shows off his seriously impressive physique. The brooding black-and-white snap puts the 32-year-old DJ's rock-hard abs and bulging biceps on full display.

We never knew #ToplessTuesday was a thing until now, but we're very thankful Chord Overstreet has made it one. "Here's a pic for #ToplessTuesdays. And yes I'm wearing my @theellenshow underwear. Lol," the actor wrote alongside the shirtless selfie on Instagram.

The seriously ripped star showed off his set of washboard abs on the set of Baywatch. "Months and months of training for this moment," he wrote in the caption of an Instagram post from the set.

The actor and avid surfer looked smoking hot on a outing to catch waves off the coast of Phillip Island in his native country of Australia.

With his roles in larger-than-life action films like Captain America and Fantastic Four, it's easy to forget that Chris Evans isn't actually a superhero.

The actor wore nothing but shorts and running shoes while soaking up some sun during a vacation to the Amalfi Coast in Italy.

The former Gossip Girl star showed off his fit physique in red swim trunks while vacationing in Mexico with his sister and brother-in-law Tony Romo over Memorial Day weekend.

The Magic Mike XXL star was spotted on the beach in Hawaii showing off his rock-hard stomach.

Alabama native Tatum borrowed from real life to inform his role in Magic Mike: prior to his gigs modeling and acting, he earned his stripes (and, we assume, his abs) as a dancer in Tampa, Florida.

We fell in love with the Sons of Anarchy star (and his washboard abs) the moment he graced our screens as Jax Teller, and we've been following his moves ever since.

The R&B crooner was only 19 years old when he had his first hit single. And since then he has given us too many slow jams to count, introduced the world to Justin Bieber, and enjoyed a stint as a judge on The Voice. His body shows no signs of quitting either!

Bomer, who stars on the series White Collar, is set to show off his abs in the highly anticipated sequel, Magic Mike XXL.

Best known for his role in Gossip Girl, Crawford has also ventured into film, starring opposite Anna Kendrick and Jennifer Lopez in What to Expect When You're Expecting.

Joe works out six times a week to transform into his warewolf character Alcid Herveaux on HBO's True Blood. He showed us his stripper moves in Magic Mike, and went on to make a documentary on professional male dancers called "La Bare".

The Swedish import made us laugh in Zoolander, and made us swoon over him in True Blood. We are glad to see this Viking vamp back in Bon Temps, for the final season of the show.

The Irish actor began his career as a model for Calvin Klein, and is now bringing his abs to a much different role—playing the irresistible entrepreneur, Christian Grey, in Fifty Shades of Grey.

The first of many "Ryans" to make the cut, this Canadian heartthrob needs no introduction. Star of The Notebook, main squeeze of Eva Mendes, and the cutest Internet meme around, Gosling has ladies the world over swooning.

The name's Craig—Daniel Craig. The latest reincarnation of 007 made headlines in 2006 as the first actor to play James Bond who was born after the series began. He reprised his role in 2012's Skyfall, and is set to play the iconic character again in 2015.

Jackman is equal parts charming and sexy. Born to British parents in Sydney, he can captivate us as surly Wolverine in X-Men and also as the musically inclined Jean Valjean in 2013's Les Miserables.

Even when he was just one of five in boy band *NSYNC, Justin Timberlake stood out as a clear frontrunner for solo success—and he hasn't disappointed. No one-trick pony, he's also won four Emmys for his work on Saturday Night Live and starred in films including 2013's Runner Runner and Inside Llewyn Davis.

We know Hemsworth for his starring role as hunky Gale in The Hunger Games, but the actor who grew up alongside his brother Chris in Melbourne, Australia first flashed his chiseled abs in 2010's The Last Song.

Prince William's little brother may be known as the wild child of the royal family, but Prince Harry of Wales is also known for hisdashing good looks, including his abs.

We didn't fully understand the impact of Reynolds' obliques until 2005's The Amityville Horror, when they were first prominently on display. We envy his wife Blake Lively, who now gets his stunning abs all to herself!

The professional soccer player is best known for his impressive physique and kempt eyebrows. Hello, handsome!

We first met the master of the brooding stare in 2004, when he played Adam on Smallville. Since then, the Louisiana native won us over as Damon on The Vampire Diaries.

's Emmett Cullen might be second fiddle to Robert Pattinson's Edward, but with this six-pack (or maybe it's eight?), this country boy from North Dakota is first in our book.

Efron first charmed us as teen Troy Bolton in 2006's High School Musical, but now the California native and his abs are all grown up!

As the sexy lead singer of Maroon 5, Levine's soulful voice and moves like Jagger have us swooning everyday of the week.

Victoria Beckham's hubby David is one of the foremost soccer stars in the world, has an underwear partnership with HampM, and is worth a total of $219 million. Can he get any more dreamy?

We first learned about the slapstick side of Bradley Cooper when he starred in 2009's The Hangover and the serious side in 2012's SIlver Linings Playbook, but did you know he is fluent in French? As if we needed another reason to swoon!

McConaughey may very well be the King of Celebrity Abs. He's oft spotted running shirtless (anywhere in the world), and his seedy, barely-clothed character in Magic Mike showed off his six/eight/ten pack the entire time. 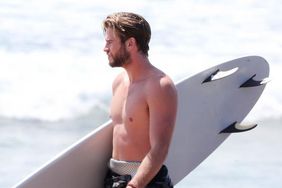