Fashion and film are often intertwined, with one always heavily influencing the other. And one fashion house is already very familiar with dipping its double G-clad toe into the world of cinema (à la House of Gucci). Now, Gucci is channeling some of the most iconic films from the mind of renown cinematographer Stanley Kubrick in its latest campaign, titled "Exquisite," by recreating recognizable scenes from his cult classics. Kubrick was most known for his genre-bending portfolio of work, which included everything from horror (The Shining) to comedy and period dramas (Barry Lyndon).

In the campaign's striking imagery — captured by famed photography duo Mert and Marcus — Alessandro Michele, the storied Italian fashion house's creative director, blends style and film by plopping the brand's signature aesthetic right into the world of the movies. An adidas x Gucci dress in the mint-green bathroom of the Overlook hotel, an extravagant tulle gown inside a spaceship, and a faux-fur coat accessorized with pearl-and-rhinestone jewelry amongst a crowd of masquerade mask-clad faces are just a few of the scenes from "Exquisite."

"As an act of love, I decided to reinhabit Kubrick's films, pushing to the core this incendiary approach. I took the liberty of disassembling, blending, grafting and reassembling them," Michele explained in a press release. "Sticking to my creative praxis, I seized those movies, resemanticizing them, populating them with my clothes."

An accompanying video plays out different scenes from the movies, recreated with designs from Michele's latest collection, which debuted at Milan Fashion Week this year. The well-known scores from the flicks play in the background and set a chilling, but magical, tone for the short film.

Michele captures the Victorian era of Barry Lyndon with adidas x Gucci sportswear transformed into Regencycore fashion, while another look channels Nicole Kidman's character, Alice Harford, in Eyes Wide Shut with a black slip dress. The brand's take on menswear emulates the vibe of a 1970s dystopian crime flick, aka A Clockwork Orange. The photography captures the pieces so exquisitely, that they appear to belong in the movies.

"With 'Exquisite' I carry on my attempt to mingle high and low, this time coherently and synergistically with the grammar of the great director," said Michele. "Everything comes to be iconic, symbolically sophisticated, though able to reflect on a culture that we can definitely identify as pop. I chose Kubrick also for this, after all. What he created is part of our collective imagination."

Keep scrolling for a complete look at the Gucci "Exquisite" campaign recreating scenes from Barry Lyndon, A Clockwork Orange, Eyes Wide Shut, 2001: A Space Odyssey, and The Shining.

'Replicas of the original costume designs curated by Milena Canonero and Charlotte Walter'. 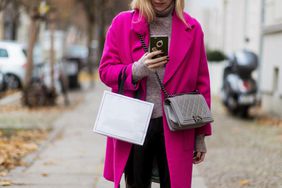 Here's What InStyle Editors Bought (and Swear by) Last Month