How Aurora James's viral Instagram campaign is making an impact.

Aurora James's ask is reasonable: Black people make up 15 percent of the population, so Black brands and designers should represent 15 percent of retailers' shelf space. Why is it so difficult to get stores to commit?

On June 1, as anti-racist protests erupted in all 50 states and many international cities, the Brother Vellies founder and designer launched a campaign urging retailers to commit to proportionate representation in their merchandising. The 15 Percent Pledge, as it's called, has drawn over 27,000 followers to its Instagram page in just seven days and inspired hundreds of posts to the #15percentpledge hashtag.

"I had the idea of the 15 Percent Pledge last week," James tells InStyle. "As a business owner, and during this pandemic, I am especially torn up by how much Black businesses were suffering. I believe this pledge is ONE way major retailers can work on beginning to take steps towards financial equality."

James outlines her proposal to retailers in three parts:

The pledge, she hopes, will help recirculate spending power back into Black communities. "Black people spend trillions of dollars in this country every year but yet represent an insignificant fraction of how these companies allocate their purchasing power. I am asking these huge corporations to rethink their business strategy as well as rethink business relationships in order to fairly represent the Black community on their shelves."

In the days since James launched the campaign from her personal Instagram page and the dedicated Instagram account that shortly followed, only a handful of brands have explicitly come forward to commit to the pledge. James is hopeful that this is just the beginning, though. "We have seen an incredibly positive response from supporters all over the country, but we're just getting started on conversations with the bigger businesses to ask them to sign and make this a reality."

Beyond the intended target audience of mega-retailers, individuals are taking it upon themselves to adopt 15 percent policies into their own lives as consumers. James says she's hearing from a lot of people who intend to make the pledge by committing to buying at least 15 percent Black — a few clicks through the movement's hashtag uncovers influencers and private individuals alike making public statements on the matter. That same energy, though, seems to be faltering on the commercial end.

In preparation for this article, InStyle reached out to a dozen top retailers inquiring whether their current merchandising mix met the pledge's threshold, or if they would be willing to publicly commit to meeting it within the next year. While many of them are showing their support for the movement with substantial donations and efforts toward transparency, most fell short of divulging the ratio of Black-owned brands stocked or agreeing to the pledge outright.

While a predominantly white industry may need to be called out in order to move in the right direction, Black-owned multi-brand retailers don't require a pledge to stock Black-owned brands. As we wait for the industry at large to catch up, a surefire way to support Black creators and businesses is to buy directly from Black-owned shops.

Below, find a list of retailers who have committed to Aurora James's 15 Percent Pledge, plus Black-owned shops, boutiques, and platforms to support today. If you want to support the movement yourself — and demand the attention of the major retailers who've yet to comment on the campaign — you can sign the pledge at 15percentpledge.org or by texting PLEDGE to (917) 540-8148.

Retailers who have pledged:

As a direct result of James's efforts, Sephora has agreed to sign on to the 15 Percent Pledge, making the announcement on Instagram this Wednesday. Sephora was one of the four brands originally mentioned in the campaign's petition. "We recognize how important it is to represent Black businesses and communities, and we must do better. So, we're starting now."

In response to the announcement, the 15 Percent Pledge wrote, "We commend their early leadership and look forward to working with them on their accountability and commitment as we join together in the mission to put billions back into the Black community."

Rent the Runway announced a $100,000 donation to anti-racist organizations and its intent to allocate $1 million to supporting Black designers at its company. "We are committing today that at least 15 percent of the fashion talent that we feature and support moving forward are from the Black community, inclusive of the models in our marketing, the ambassadors we use, and the styling talent, photographers, videographers and crews behind the camera," a statement on Rent the Runway's Instagram read.

Skincare company Heyday also released a statement on Instagram: "We are committed to (1) working towards stocking at least 15% of our shelves with Black-owned brands and (2) launching a program that donates both funding and consulting to Black entrepreneurs in the skincare industry who would benefit from additional resources. We have to start somewhere."

While it neither referred to James's campaign specifically nor pointed to a concrete rate of inclusion, MatchesFashion shared an action plan that aligns loosely with the 15 Percent Pledge, including the commitment to publish "an annual breakdown of the designers we support by ethnic background," which will become available at the end of August.

San Francisco-based boutique Lisa Says Gah announced in a press release and via Instagram their commitment to purchasing a minimum of $10,000 of stock from Black-owned businesses for the month. It's unclear whether that figure constitutes 15 percent of the company's buying power or whether the effort will be replicated in coming months.

Personal shopping platform Threads Styling announced in an Instagram post that it would be committing to the pledge.

Actress Emma Watson called on sustainability-focused app Good On You to "ensure a greater percentage of the sustainable brands they feature are founded or led by black people," while referring specifically to James's 15 Percent Pledge.

Montreal-based luxury sex toy boutique Nox Shop joined the pledge on Monday, adding that it would also be donating 10 percent of monthly sales and committing a $5,000 grant annually.

Wedding dress brand Loho Bride committed to the pledge on Monday. It also committed to donating 100 percent of proceeds from "Bridal boxes" that showcase Black designers directly back to Black-owned businesses, and offering a 10 percent discount to customers who can prove they voted in the Democratic presidential primary.

Aligning with the brand's chief creative officer stepping down in the face of major social media accusations of a racist work environment, ban.do announced that it would be committing to the 15 Percent Pledge.

Bed Stuy, Brooklyn-based boutique Sincerely, Tommy is beloved in and far beyond the neighborhood. Owner Kai Avent-deLeon constantly stocks the brick-and-mortar and webshop with gorgeous, elevated pieces from a diverse group of brands.

Bay Area-based boutique McMullen, launched by Sherri McMullen, carries dreamy luxury pieces from Black designers and other creatives at its Oakland and Palo Alto storefronts, as well as its webshop.

NYC-based concept store Folklore centers its inventory around designers from the African diaspora; the collection is always fresh, inventive, and extremely covetable.

While not a fashion or beauty boutique, Reparations Club is the literary resource any hip, style-minded person needs in their life. Plus, instead of bothering your Black friends to make you a woke reading list, you can just navigate here and buy everything instead.

This health and wellness site has been called "the Black Sephora," but its inventory actually expands well beyond the beauty category. Shoppers of all genetic backgrounds can discover clean beauty products for hair, skin, and menstrual needs, as well as items for the home, supplements and tonics, and baby needs, all from Black brands and creators.

BOM, or Black-Owned Market, started as a pop-up in New York and has since grown into an online presence to be reckoned with. Shop top goods from Black-founded brands for the home, body, and mind. 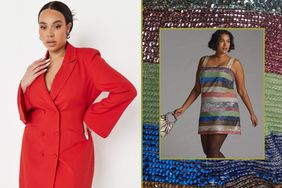