See a gallery of Edie Falco's red carpet dresses through the years.

Falco stunned at the Screen Actors Guild Awards in a form-fitting red dress featuring chiffon straps tied at the tops of her shoulders.

The actress looked every bit the classic beauty in a fail-proof black mermaid gown at the Golden Globes.

A silken, intricately draped indigo dress looked riveting on the actress at the Emmy Awards.

She turned to the vibrant hue at the Emmys again, this time picking a beautifully simple dress with a high neckline and front slit.

In one of her best looks yet, Falco donned a sleek navy and white illusion gown with a metallic belt for the Emmy Awards.

The star stunned in an elegant nude-colored mermaid gown with a sheer overlay across one shoulder at the Emmy Awards.

An demure navy dress with a bejeweled belt was Falco's excellent choice for the Tony Awards red carpet.

The actress strutted the Screen Actors Guild Awards red carpet in a red strapless dress with a subtle floral motif.

Falco looked sophisticated in a one-shoulder black pleated gown with a ruched bodice at the Emmy Awards. 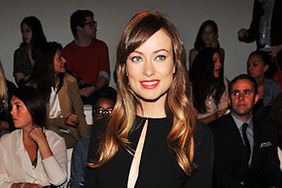