The show and its outfits are trending on social media, so here's how to get the look — again.

Got a secret, can you keep it? I'm a fashion writer, but growing up, I was the farthest thing from fashionable. I can admit, this was largely due to my lack of trying; being the quirky lit kid that I was, I spent more time dreaming up fictional worlds than I did my dream wardrobe (essentially, I was Rory Gilmore in her oversized cream sweater). But that all changed when Pretty Little Liars premiered on ABC Family in June of 2010, serving as a masterclass in personal style for its young adult audience every Tuesday night.

Being an early '90s baby, I was too young to watch Sex and the City when it premiered, and I was a few years late to the Gossip Girl fandom (though I did make an effort to channel Blair Waldorf my senior year of high school — despite having only seen a few episodes of the show). But Pretty Little Liars caught my attention immediately, with its thrilling plotlines, steamy romances, and, as far as I was concerned, some of the most covetable outfits on TV. And though it's been a whopping 10 years since the show first premiered, I still reference the aesthetics of the four main characters — Aria Montgomery, Spencer Hastings, Emily Fields, and Hanna Marin — when I'm in need of outfit inspiration.

After each episode, I'd flock to Pretty Little Liars Closet, a Tumblr page established in 2013 by fans of the show who had a knack for identifying the exact clothing items worn by the girls, categorized by season and episode. Unfortunately, most of the pieces are long sold out today (unsurprisingly, being that the show ended in 2017). However, the website still lives and can be used as a kind of encyclopedia of the Pretty Little Liars aesthetics. It can serve as an inspiration board and point you in the direction of which brands to shop in order to nail a specific look.

Plus, as we begin welcoming back trends from the 2010s, such as twee and mid-section belts, it doesn't hurt to determine your own Pretty Little Liars aesthetic. Below, I've broken down each of the core four Liar's look and where to shop to mirror her aesthetic.

Aria Montgomery (played by Lucy Hale) had the most eclectic fashion sense of the Liars by far; you never knew what this artistic character was going to piece together from her wardrobe. The only thing that remained consistent across her outfits was their quirkiness, a reflection of Aria's edgy-meets-whimsical taste.

Wishi stylist Caroline Machand tells InStyle the liar's closet is comprised of "unique shapes, fun prints, and feminine frocks, layered with fishnets and heavy hardware to create the ideal grunge girl look." She wasn't afraid to mix and match wild prints and color patterns or layer funky accessories and had a flair for overlapping aesthetics. She also loved a punk moment (never forget the pink stripes in her hair circa season one), and according to the show's costume designer, Mandi Line, you can thank Aria for the resurgence of black and white stripes in the early 2010s.

"That's all Aria wore first and season the second season. It's everywhere now," Line told Entertainment Weekly back in 2013, crediting the feather trend to a last-minute PLL styling decision, too. "It was totally unsanitary," Line says of the moment when she took off her own feather earring and put it on Hale. Sometimes, it really is the small details that make the greatest impact; both Aria and Line are great examples of this.

Spencer Hastings (Troian Bellisario) was meant to be portrayed as a preppy teenager. Line understood the assignment and went above and beyond to get herself a gold star. Spencer didn't just live up to the country-club, prep-school stereotype, she personified it, but in a way that made the somewhat "stuffy" aesthetic cool and age-appropriate.

Throughout the series, there were definitely moments where dark and light academia shone through Spencer's outfits — think pleated skirts and knee-high socks, button downs with a sweater vest or a blazer, a tailored dresses and long coats over top. Wishi stylist, Wendy Wei points out there were also times when Spencer incorporated more sexy silhouettes and boho styles into her wardrobe, and often served Kate Middleton vibes.

Still, what set Spencer's definition of preppy apart from the traditional dictionary summary was her love for animal print. And by animal print, we're not talking zebra stripes and cheetah spots. We're talking about actual animals printed on clothing, like elephants, rabbits, and horses. "The real fans would notice I always put animal prints on her," Mandi told Seventeen.com back in 2014.

Out of all the Liars being discussed in this list, I think it's safe to say that Emily Fields (Shay Mitchell) underwent the most dramatic style transformation from season one to the show's finale. But her wardrobe changes reflected the growth of the character.

When viewers first meet Emily, she's wearing a blue, green, yellow, and white-striped tank top and a matching cropped cardigan over her shoulders, paired with a basic denim skirt and clean white sneakers. The look is feminine and athletic — and a stark contrast to the moody color palettes and the more masculine pieces that start to pop up in her wardrobe each season.

If I had to break down a "get the look" guide for Emily Fields, my best tip would be to establish your capsule of basics, then find pieces that have a bit of an edge to dress them up, like a cool jacket or tough footwear (i.e. boots with chain detail, studded sneakers, etc.). And according to costume designer Cameron Dale, who stepped in for Mandi in 2016, I'm on the mark.

In an interview with TeenVogue.com, Dale revealed that a combination of "jeans, worn-in t-shirts, and leather jackets," was her go-to formula when shopping for Emily.

When I think of Hanna Marin (played by Ashley Benson), I think of someone who lives for a trend, who dresses according to what the runways dub hot and not from season to season. And she loves to shop — anywhere and everywhere, from Forever 21 to Net-a-Porter. In no way, shape, or form is she a minimalist. No, this girl is maximalist and proud of it; the world is her runway, and she has the closet to perform.

RELATED: 8 Fall 2022 Trends You Already Have in Your Closet

For Hanna, it's always better to dress up than to dress down. She loves to make a statement with her jewelry, be it chandelier earrings, a fun pair of shoes, a chunky belt, or a long necklace. She's also never without a fabulous handbag, so arm candy is a must. That being said, like Emily, Hanna goes through a style transformation of her own, "to the dark side," as Line described to E! News back in 2014:

"[If you want to dress like Hanna], the old Hanna would do a really bright blazer, beautiful earrings, and heels. She never walks out the door in flats…She couldn't be more glam." 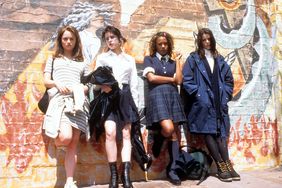 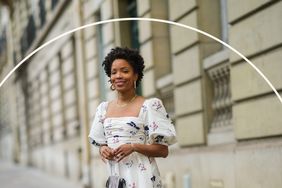