When it comes to perfect fashion pairings, the classics that first come to mind include skirts and sweaters, Oxfords and blazers, or white tees and jeans. But now, thanks to a slew of style-savvy stars, there's a new classic combo in the making—dresses and pants. Traditionally, they've existed as mutually exclusive pieces (as in, you either wear a dress or a top and pants—but not both), but ever since Emma Watson turned heads at the Golden Globes last year in her dress-and-pant pairing by Dior, instances of the pairings have cropped up on the runways, the red carpet, and the streets. And we have the celebrity proof to back that up—below, we've rounded up 10 looks that prove pants and dresses make quite a pair.

For the 2015 Academy Awards after party, Kruger took the monochromatic trend to the next level with this siren-red Donna Karen design that featured a one-shoulder gown and a pair of matching tailored trousers.

Banks put an end to the gown versus pants debate and chose to wear both for The Hunger Games: Mockingjay, Part 2 UK premiere. She went for a metallic graphic Razan Alazzouni gown that was cut to reveal a sleek pair of black pants underneath. The finishing touches? Marli diamond earrings, a Pasquale Bruni ring, an Edie Parker clutch, and black Casadei pumps.

Brewster styled her strapless black tunic with a matching pair of satin pants. The effect? On-trend sophistication with an edge.

The singer matched her black lace Givenchy dress with a pair of matching wide-leg trousers.

Palermo made a date night out of a movie screening of Spectre, selecting to wear a sleek off-the-shoulder Tibi dress with a pair of wide-leg pants. So elegant, yet so modern.

Kruger's affinity for the dress-and-pant combo knows no bounds—at the 2015 Met Gala, she wore a strapless embellished tunic with sheer lace pants by Chanel.

The dress-pant pairing works in casual settings as well—Teigen made a statement on the set of Extra earlier this year in a crisp white draped shirt dress that revealed black skinnies underneath. Her shoe of choice? Black suede Giuseppe Zanotti open-toe booties.

OK, this is more of a skirt than a dress, but the idea is the same. Hudson worked her curves in a bustier top and black skinnies with a dramatic ball gown skirt. 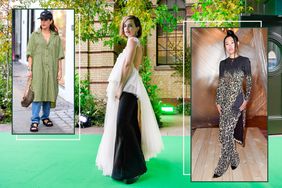 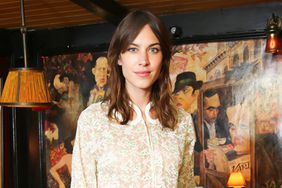 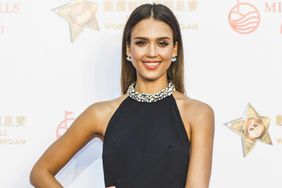 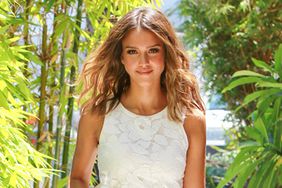