We can't stop watching these cute 'get ready with me' videos.

The 2022 Winter Olympics are in full swing, and some U.S. athletes are serving us more than just medals. Since touching down in Beijing, snowboarders Maddie Mastro, Meghan Tierney, and even Shaun White have been giving fans a behind-the-scenes look at Olympic fashion. To say there's a lot of layering involved would be an understatement.

Lindsey Vonn Is Retired — and Busier Than Ever

At 21 years young, Mastro is a lot of things — an Olympic medalist, a proud dog mom, a surfer, a mountain-biker-in-training, and, from the looks of it, an up-and-coming Tiktok star. She posted her first video to the platform in June of 2019, and the multi-talented athlete's account has since become a modge-podge of content, from showcasing her skills on the slopes to catching some waves and documenting her journey to the 2022 Olympics. She's even sprinkled a few style videos throughout her feed.

In fact, it's Mastro's recent "get ready with me" videos — from behind-the-scenes at the winter games — that have commenters dubbing the snowboarder as fans' "trusted source of all things Olympic outfit related."

And though such a great title comes great responsibility, Mastro understands the assignment and continues to bring fans along as she gets dressed for various events, like traveling up a mountain to get her snowboard tuned or visiting her bestie and fellow Olympic athlete, Australian snowboarder, Emily Arthur.

She's even shown her followers and fans what it's like to get ready for major Olympics milestones, such as snapping photos in front of the Olympic rings, attending the Opening Ceremony, and doing media interviews.

But Mastro isn't the only athlete bringing some fashionable fun to the event. Her teammate, snowboarder Meghan Tierney, has also been sharing snippets of her Olympic fits. Her content mostly focuses on OOTDs, but she did give viewers a very thorough look at all her Team USA swag, neatly categorizing the pieces by brand and calling out this year's featured labels: SKIMS, Volcom, Nike, and Polo Ralph Lauren.

Arguably the best part about seeing what your favorite Olympic athletes are wearing is that you're also able to wear the same Team USA swag highlighted in Mastro and Tierney's TikToks. The clothing brands dressing the teams have made their collections available to the public, so you'll want to shop these limited edition pieces now while assets are still available. Some of our favorites from Mastro and Tierney's on our Olympic clothing wishlist include the SKIMS Olympic Capsule Cozy Knit Robe($138), Volcom Women's USST Brighton Pullover Jacket ($575), a Team USA Closing Ceremony Sweater by Polo Ralph Lauren, and Nike's Team USA Beanie ($35).

As for the Olympics' most popular accessory, Shaun White recently revealed in a fan Q&A that there's a lot of trading going on behind the scenes, which you definitely won't see on television. Athletes swap hats, bags, and shoes — "little things you can trade with other teams," said White — adding that "the biggest would be pin trading." In his own TikTok video, White showed us what he meant, holding up a decorated lanyard of colorful, artistic pins, each of which represents a different country participating in the games.

So, even as you fire up your TV to watch the competitions take place, you definitely won't want to abandon your cell phone. For ever gold medal, there seems to be a winning outfit combination to match, and we'll continue scrolling through TikTok to find them. 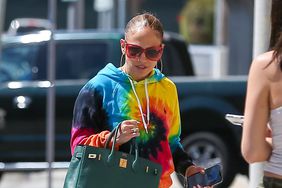 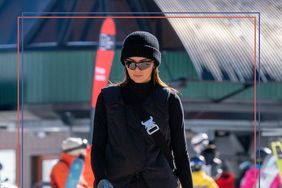