The star of the HBO Max show, Ophelia Lovibond, as well as its brilliant costume designer, Beth Morgan, share all the details behind the looks we still can't stop thinking about.

It's hard to upstage a perfect penis, but Minx does it with denim.

The sexy comedy on HBO Max follows Joyce Prigger, a tightly wound '70s feminist who tries to launch a staunch women's lib magazine. Instead, she pratfalls into the world of disco porn, creating her own "female gaze" magazine (the Minx of the title) with nude men posing next to essays on birth control and divorce. The show has more dick pics than most Euphoria subplots, and sure, that's fun. But what's gotten audiences really hot is the fashion, which includes velveteen suiting, platform heels, and archive amazement like a vintage Alberta Ferretti chainmail dress and a python beaded gown from Krizia.

"What's funny is, especially at the beginning, Joyce is not cool!" says Ophelia Lovibond, who plays the minx herself. "But her clothes are... Even in the stuffy three-piece suits that Joyce wears at the start. She's so concerned with not being sexy because she wants to be smart, as if she can't be both! But to a lot of people watching — my friends, definitely — even her 'stuffy' looks are amazing today."

Indeed, several "peak Joyce" looks — including the jacquard three-piece suits and tweed blazers worn in the first few episodes — could easily be mistaken for runway creations by Gucci or Brandon Maxwell today. But costume designer Beth Morgan, whose credits also include ROAR and Glow (two other strong-female led shows that are just as noteworthy for their clothing), notes that while Joyce's vibes may still sell clothes, every Minx costume is at least 40 years old.

"So many pieces from that time were made with polyester, which is almost indestructible; it can last a really long time," she explains. "We rent some of the designer pieces from a costume warehouse; we buy others from high-end vintage stores…like Recess, which is my favorite, or A Current Affair. But we also find it on Etsy," she says. "It's all still all there, in great condition!"

There's also a difference in styling — Harry Styles may wear his sateen pantsuit with no shirt, but Joyce starts her Minx journey doing the opposite. "Her blouses and jackets are buttoned all the way up," says Lovibond, "Because Joyce herself is so buttoned-up. She's stuffy, even. She thinks that sex is a liability."

But as Joyce comes into her own and Minx magazine becomes an underground sensation, the accidental porn purveyor begins to loosen up. "First you see her blouses open at the top," Lovibond says. "When she wears jeans, that's when she starts mimicking Doug," she says, referring to Jake Johnson's character. He is Joyce's boss, a shabby but flamboyant publisher who looks like he's perpetually late for a lounge act. "She puts on those jeans, and suddenly Joyce is leaning all the way back on the couch and sitting like Doug when he's calling the shots… which by the way, was difficult, because those jeans are vintage, and people back then were tiny. Like, where did they put their organs?!" (Morgan confirms that Joyce's jeans have gotten a steady stream of inquiries from friends and admirers. "Like everything else on the show, all the denim is vintage," she says. "A hundred shoppers can't buy identical pairs, which I think is part of what makes it special to people. You can sense that there's real effort behind such an 'effortless' look.")

Minx's first season ends with Joyce returning to her former home base of New York City, and at first, she comes in triumph. "New York is when we start to see Joyce in metallics, in really sleek and shiny pieces," says Morgan. "She's dropped her armor," adds Lovibond, referring to Joyce's take-all-prisoners pantsuits. "She's arrived and she's finally feeling like she can shine a little bit on her own." Her Hollywood vibe gets hosed off by Victoria Hartnett (Hope Davis), a second-wave feminist who upbraids Joyce on live TV and wears an earthy, oversize poncho and stucco-colored jumpsuit to do it.

After such a public crash, it would be easy for Joyce to retreat into herself and back into those constraining three-piece suits. Instead, she does something pretty cool, arriving for a dinner party in a beaded snake gown that's arguably her most iconic look so far. "She's slithering through the streets of New York!" exclaims Morgan. "Is she predator or prey? Nobody knows yet, including her." The dress in question was purchased on 1st Dibs for $2,100; it now has its own Reddit thread. And its powerful symbolism is clear: A snake winds across the torso and the hem of the dress, as if Joyce herself is shedding a previous skin.

Which brings us back to the jeans, which Joyce wears with a plain white crewneck sweater in the final scene of season one. "They're her outfit for when she's feeling like she doesn't need to answer to anybody," Lovibond says. "She's more relaxed again. She's taking back who she is. But you know," she sighs, "Joyce Prigger still has a long way to go." 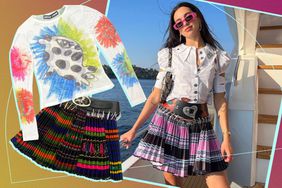