It’s been a busy fall for Grace Elizabeth. The model has just returned to New York City after walking the runways in Milan and Paris. She was hoping to enjoy some downtime, but her break will be short-lived. With the annual Victoria’s Secret Fashion Show less than a month away, she has yet another catwalk to conquer, and that requires getting into hard-core shape.

This time of year, says Elizabeth (her last name is Cabe, though she sticks to her middle moniker professionally),
“I ramp up my exercise routine, which means boxing five days a week and jumping rope in the morning.” And then there’s the meticulous beauty regimen: “Facials, teeth whitening, hair masks — at the end of the day, it’s all about the hair.”

Of course, Elizabeth’s success stems from more than a perfect coif. Since catching her first big break as the 2016 Guess Girl, the now 21-year-old has exhibited a chameleonic beauty that can shift from sweet girl next door one moment to striking glamazon the next.

Influential stylist Katie Grand, who cast Elizabeth as an exclusive in Miu Miu’s fall 2016 show, was an early supporter. “She really took a chance on me,” Elizabeth remembers. Her prior runway experience? Prom and bridal shows at her local mall in Lake City, Fla., where, she admits, “I must have been the youngest bride up there.” Post-Miu Miu, however, contracts with Victoria’s Secret and Estée Lauder soon began to filter in, and last spring she really hit the big leagues when she was chosen by Karl Lagerfeld to appear in Chanel’s spring 2018 campaign.

All of this still feels very new to the rising star, who didn’t have much exposure to or concern with high-end fashion as a kid. “Our biggest stores were T.J. Maxx and JCPenney,” she says. “I wore a T-shirt and jeans everywhere.”

Elizabeth has since come to appreciate buzzier brands such as Off-White and Vetements, but her interests extend beyond her wardrobe. A lover of “fried Oreos, fried chicken, fried everything,” she likes to spend time in the kitchen creating cleaned-up versions of comfort-food staples, like baked broccoli tater tots and protein-packed brownies. She’s also studying nutrition through an online program to become a licensed dietitian.

But for now Elizabeth is more occupied with where modeling can take her. “I think about six months into this job I knew I wanted to make a career of it,” she says. “And here I am, four years later, living it up!”

Photography: Johan Sandberg. Styling: Julie Pelipas. For more stories like this, pick up the December issue of InStyle, available on newsstands, on Amazon, and for digital download Nov. 9. 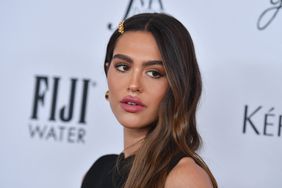