'Ferris Bueller's Day Off' Turns 35 This Month, and I Still Want to Dress Like His Girlfriend, Sloane Peterson

Your first fashion crush never goes away — but also her looks are very Summer 2021.

I have this theory about the movie Ferris Bueller's Day Off, and it's that each of the main characters represents a different phase of self-actualization. We all may go through a fun-loving Ferris phase, but it's important to outgrow it, because it isn't cool to steal your friend's parents' car on a lark when you're an adult.

Released on June 11, 1986, the film turns 35 this week. I was, uh, released three years earlier and now, as a newly 38-year-old woman, I am reaching my Sloane Peterson phase. Finally.

When I watched the film as a teen, which I did often, I fully identified as a Ferris. This makes sense at that developmental stage when we each think we're the protagonist of everything. (I was also extremely affected by The Truman Show, but that's a rant for another time.) Ferris is above all fun. People like him, but he isn't popular for his looks or wealth the way most '80s (and '90s) high school flicks told us we had to be. He gets by on his wit and his ingenious — and mostly victimless! — deceptive ploys. But he's too self-involved and focused on his own plans to really be a good friend (my 20s in a nutshell).

In my 30s, I arrived at Jennifer Grey's character, Jeannie — Ferris's feminist big sister, who is fed up with everyone's shit, especially because it keeps becoming her problem (weird coincidence, I became a mom in my 30s). She's sardonic. Constantly phased. She's maternal, protective, wears cardigans, and is transparently jealous of her peers who are able to relax and have fun. Through the pandemic, I became 100% Cameron — ill-at-ease if not literally ill. And now? This summer, I'm determined to be Sloane Peterson, a character best described as hot.

Sloane Peterson wears lingerie into a stranger's pool and people literally die from the heat. Sloane Peterson walks out the door of her high school and the principal himself throws the attendance rules right out the window, then watches her make out with her "dad" (it's Ferris). Sloane Peterson and Ferris Bueller walked so Cher Horowitz and Josh could run, but again, I digress. Sloane Peterson wears a fringed, white-leather jacket and matching midcalf boots to HIGH SCHOOL. I was in another decade and fashion era entirely, but my biggest fashion investment at the time was a pair of Mudd jeans. Sloane Peterson got serenaded off a parade float in Chicago and proposed to at the stock exchange. I worked afternoons at a CD store in a suburban mall (RIP CDs, stores, malls).

Elsewhere in the cinematic universe of 1980s high school, the Heathers were wearing basically business suits to school. And while that look is coming back as Light Academia in 2021, and it shares the biggie-sized shorts silhouette that Sloane favors, in the context of actual high school it feels way too try-hard.

When she's not wearing her fringed leather jacket, Sloane wears an oversized, white long-sleeve tee, with the sleeves rumpled up around her elbows in a way, I swear, Jenna Lyons based entire years of J.Crew styling on. That's it, a white long-sleeve tee. Her shorts? They are high-waisted, army-greenish gray, and otherwise pretty plain. Timeless, but nothing flashy.

Light Academia Is the New Trend Threatening to Replace Cottagecore

At a time when we've been hermit-holed up at home for more than a year, and people are rummaging through their closets (or ecomm sales) to invent a whole new fashion persona post-pandemic, I'm finding comfort in the basics that feel good enough to wear working from home, and look good enough for the rare, exciting encounter outside.

In this Sloane look, her hair does all the work. It is a silky sheen that looks healthy, which could be because she is an actual teenager, but let's say for now that self-care has something to do with it. It is most definitely not parted in the center. Her face, all plump and rosy, glows in the 'you but better' no-makeup-makeup that stays in fashion no matter how many winged-eyeliner or sunset-eyeshadow looks momentarily hit. She looks the way that first day spent in the summer sun feels, but amplified times a million because of how cooped up we've been and the fact that her world never coexisted with Covid at all. Bottle that and sell it to me.

So while everyone else is burning their budgets on going-out tops, frilly nap dresses, and upside-down bikinis, I say you can keep your showy post-pandemic style. I would like to flip my hair to one side, put on my best basics, and step into a parade someone else planned knowing I look good. Finally, at damn near 40, I'm ready to. 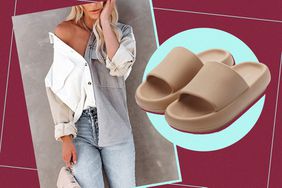 I'm a Shopping Editor, and These Are 5 Amazon Deals I'm Adding to My Cart This Weekend