Celebrities go all out for Fashion Week. Seriously, planning different outfits for every single show is the norm, even if you have five presentations in one day. But things were totally different when our favorite style stars first hit the scene.

Before Kim Kardashian West had the biggest designers on speed dial, she kept her trusted wide-waist belts and Christian Louboutin pumps on repeat. And Nicky and Paris Hilton have always had access to big brands, but there was a period when they consistently dressed like twins.

What's even more nostalgic than looking back at the retro outfits, is the roster of throwback fashion brands. Stars were doing any and everything to attend the runway shows of iconic fashion houses like Sean John and Baby Phat. Yep, those were the good ol' days. Take a trip down memory lane and scroll on to see some of our favorite celebrities attending one of their first Fashion Week events below.

Beyoncé played with pops of color as she took her front-row seat at the Gianfranco Ferré Spring 2004 presentation.

Jennifer Lopez served up a dose of glam with a furry dress and knee-high boots at the Tommy Hilfiger Spring 2005 presentation.

The Hilton sisters showed off their matching style while attending the Sean John Fall 2001 fashion show.

One of our favorite actresses looked super adorable in a minidress while in the front row of the Proenza Schouler Spring 2006 show.

Palermo kept things classic in a LBD for the Kai Kuhne: Myself Spring 2007 presentation.

Kardashian worked her angles in a green, silky dress while backstage at the Nicole Romano Fall 2007 show in New York City.

Nicki Minaj was completely committed to her Harajuku-Barbie vibes in the front row of the Prabal Gurung Spring 2012 presentation.

Jenna Dewan played with trends from the early 2000s while attending Smashbox Fashion Week in 2003.

Holmes chose a gorgeous ruffled dress as she attended the Christian Dior Haute Couture show in 2004.

Jaime King stuck with timeless pieces as she hit up the Michael Kors Spring 2003 presentation in New York City.

Henson chose a silky dress and strappy heels for an event during the 2004 Mercedes-Benz Fashion Week in Culver City.

Gabrielle Union proved that black separates always work while in the front row at the Richard Tyler show in Spring 2004.

Ciara showed off her toned abs in low-rise jeans at the Anna Sui Spring 2006 presentation.

In 1993, Julia Roberts looked like a superstar in all black for a Richard Tyler fashion presentation. 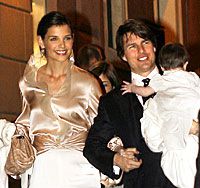