The following is from InStyle's February issue, on newsstands and available for digital download now. Eric Wilson's piece is part of a monthly column titled Fashion Statement.

When the spring collections were first shown last September, some of the standout trends that captivated fashion editors were pretty pink dresses, sporty bandeau tops, and some mightily short skirts proposed by influential designers like Marc Jacobs and Miuccia Prada. The direction was one of femininity, though not necessarily that of the classic ladylike variety. Rather, the shows reflected an underlying desire in the creative community to show support for the power and rights of women at a critical moment in history. A lot of designers, led by Phoebe Philo of Céline, offered clothes that mirrored the complexity and chaos of women's lives today.

Nowhere could this women-friendly message be read more loudly and clearly (and literally) than at Dior, where a new creative director, Maria Grazia Chiuri, was making a pointed statement as the first woman to hold that position in the company's 70-year history. Paying tribute to the writer Chimamanda Ngozi Adichie, who was in attendance at the show in Paris, Chiuri included T-shirts in the collection that were printed with a line from one of the author's speeches: "We should all be feminists." The designs were well received, especially so in an industry that generally leans far to the left and, during the U.S. presidential election, had broadly favored and campaigned for Hillary Clinton. In fact, not since the days of the suffragettes have designers and magazine editors been so explicit in making their politics known, which might have been a reaction to how unsettling the campaign discourse had been back home.

Although the results were quite the opposite of what most people in media and fashion had imagined, in the end we are entering a season in which clothing can play an unexpected role in how we communicate our viewpoints to the world. Wearing a pantsuit or a pussy-bow blouse suddenly becomes a political act, open to interpretation. And Dior's T-shirts now can be construed less as messages of inclusion than as those of protest.

But the underlying intention—to celebrate women in some way—remains the same, which is, hopefully, something we all can agree is positive. At her show Chiuri said, "I strive to be attentive and open to the world and to create fashion that resembles the women of today," which is, after all, one of the foremost functions of fashion, to reflect our times and our desires. The cause of feminism, in particular, benefits when fashion embraces the imagery of strong women, much as Stella McCartney and Donatella Versace have done in their recent collections, because clothing is, in a way, a universal language. And it is becoming less of a stigma for smart women to talk about fashion or embrace feminine clothing in the workplace rather than dress like men to get ahead.

Still, many people were surprised when Adichie, known for her novels Americanah and Purple Hibiscus, was hired as the face of a Boots makeup brand, No7, last November. Yet, as she notes, her engagement with style is a great example of how perceptions can change when you ask if a man would be judged the same way. "When we see a man who's well dressed, we don't assume that he must be shallow or he must not be a serious person," Adichie said in an interview in The New York Times.

Although one can hardly imagine how feminism will fare in the coming years, fashion's newfound support sets a good example, particularly when you consider all the negative aspects of this industry that have had a contrary effect for decades. Advertisements and modeling standards, as well as how sizes are represented in stores, play an enormous role in how women perceive ideals of beauty. And this is a responsibility that has rarely been taken seriously by designers of women's clothing.

Yet it is heartening to see how many of them have actually become interested in women's lives. Prabal Gurung, for one, was so moved by the election that he paid tribute to pioneering women like Emily Dickinson and Gloria Steinem in his collection. A black T-shirt in his show was embroidered with the words of Susan B. Anthony: "They threw things at me, but they were not roses."

During a recent interview with Jonathan Anderson of Loewe for the February issue of InStyle, I was tickled when he mentioned he was inspired by Christine Lagarde, the managing director of the International Monetary Fund, who is well known for being one of the most powerful and stylish women in the world. Anderson, who lives in London, has been outspoken in his criticism of the populist tide in Europe that led to Brexit, among other changes in the political order, but he also sees a silver lining.

"We are living in this moment when women have harnessed a new kind of freedom," he says. "As much as it's very confusing politically, there is also something inspiring in women who are stepping to the forefront, which should have been happening hundreds of years ago."

With culture wars looming on the horizon that will certainly encompass many issues facing women around the world, fashion will increasingly become a means of expression. An example the designer Gaby Basora likes to think about is a family friend who, as a successful educator with a taste for immaculate clothes, made a point of riding the bus to work every day so that young women might see her and begin to imagine having important jobs of their own.

As the founder and creative director of Tucker, Basora often considers how specific items of clothing can be empowering, even if the sense of strength is only what we ascribe to it in our minds. "Ultimately, fashion can be a way to express things about yourself that are more meaningful than just a blouse," she says. "It's fascinating how we create illusions."

Whenever she wonders about the point of it all, Basora reminds herself of this larger purpose. "It's not only the woman who wears the clothes who makes a difference," she says. "It's the women who sew the clothes, the pattern-makers, and the women who go off to work to support their families. It's a meaningful ecosystem to be a part of."

Models and magazines encouraged voter turnout last fall with campaigns like this one from the Independent Journal Review and Rock the Vote, which imagined Kendall Jenner as Rosie the Riveter. 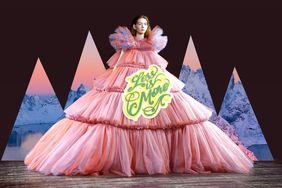