It's a new take on the iconic "Miss Dior" dress.

For Christian Dior's Haute Couture Spring-Summer 2021 collection, Creative Director Maria Grazia Chiuri looked back in time, not only to the traditions of the zodiac, astrology, and tarot, but to Monsieur Christian Dior's original "Miss Dior" dress, which made its debut back in 1949. For 2021's look 19, Chiuri resurrected the shape of the Miss Dior, which was featured in Dior's original perfume advertising campaign. The dress — and the entirety of the new Dior Haute Couture collection — made its debut in a fashion video, Le Château du Tarot, directed by Italian filmmaker Matteo Garrone.

According to a release from Dior, the new interpretation of the Miss Dior dress took a team of six people 800 hours to complete. It includes "gold lamé rouleaux embroidery" with an "appliqué of small, embroidered gold lamé motifs representing flowers blooming on a trellis."

Dior also released an exclusive behind-the-scenes look showcasing the "savoir faire" behind the 2021 Miss Dior, including the handwork involved in creating a work of art.

The whole clip blends Chiuri's interpretation of tarot (something that Monsieur Dior was also interested in when they were still called the "divinatory arts") in a way to "manifest proof that couture remains the ultimate territory of experimentation and possibility," according to the heritage brand.

"He discovered tarot in the Second World War, when his sister Catherine, who was part of the French Resistance, disappeared," Chiuri told Vogue. "In my view, I think he was so scared about her situation that he probably went to the tarot cards to try to know some more, to hope that she would come back. I think he was very worried; trying to find hope in some signs."

Raf Simons, who also served as creative director at Dior, also reinterpreted the dress in Fall 2012 with his look 47. Last year, at the brand's circus-themed couture collection, one dress took 450 hours to complete. 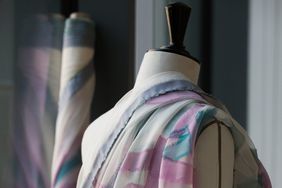