Once a muse, always a muse. At least that's the case for 70-year-old British actress Charlotte Rampling, who first rose to prominence as a model and icon in the '60s, and now nearly six decades later, is the star of Loewe's No. 12 limited-edition publication—the latest in the brand's ongoing series featuring designer Jonathan Anderson's works. (You might also remember that she was nominated for an Oscar for best actress for her role in 45 Years just last year.)

Shot by Jamie Hawkesworth and art directed by M/M, the spread features Rampling alongside Kiki Willems in spring-summer 2017 Loewe designs both inside and outside of Maison de l'UNESCO—the same location as the runway show during Paris Fashion Week. There's Rampling in a badass leather corset or a wonderfully eccentric fringe-lined caped creation, and then Willems in nouveau bohemian patchworked dresses and pretty sheer tops.

It's all very, very good—made even more so by Rampling's starring role, the most recent instance of just a handful of times when a headliner is over the age of 40 (see: Joan Didion in Céline). Basically, we're obsessed, and if you scroll through to see the rest of the images, we bet you'll be obsessed, too. 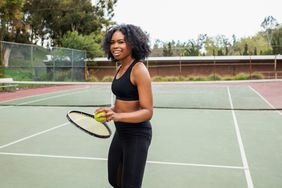