Coachella has come and gone, and while we’ll likely be talking about the performances for years to come, we also can’t forget about the celebrity outfits. After all, fashion is a major part of the music festival, and for us non-famous folks, these looks can provide outfit inspiration as we head into warmer weather.

Like most years, the overall theme was much of the same, with ensembles ranging from whoa to completely wearable. All the classic desert dancing staples were still there — denim, fringe, sheer materials, etc. — but thrown into the mix were tie-dye pieces, matching sets, and even some western influence. Plus, we can't ignore the fact that the '90s are still going strong, especially among the model crew. It's also worth pointing out that many stars opted to wear something simple, only to give it some oomph with layered necklaces or combat boots.

VIDEO: Coachella 2019 by the Numbers

Click through to see all of the standout Coachella style we spotted over the past two weekends.

Hailey spiced up her jeans with a strapless top and sparkly accessories, including drop earrings, a nameplate necklace, and a jeweled belt.

The overalls and hat that Kendall wore to a Calvin Klein event fit right in with Coachella's western style theme.

The Riverdale actress gave us a closer look at her tiny, yellow sunglasses on Instagram.

The actress seemed to be having a whole lot of fun in her short overalls and red crop top, completing her Coachella look with hight-top Converse sneakers and a tiny Louis Vuitton backpack.

Nina also styled her tie-dye Polo Ralph Lauren tee with a bandana while dancing in the desert.

We're getting Baby Spice vibes from Josephine's outfit — which, according to her Instagram caption, was definitely the goal.

What does one wear when Easter falls on the same day as Coachella? This yellow, cutout dress works for both.

This sheer, spotted, and ruffled For Love & Lemons look is the epitome of sweet meets sexy.

The Victoria's Secret Angel made sure her look highlighted her bra, letting it peek out of her flowy top, which she paired with denim cutoffs.

Kylie paired her curve-hugging maxi dress with a pair of sneakers for Kanye West's Sunday Service.

We were almost too distracted by Katy's '90s-inspired bucket hat to see the strap on her phone case. Smart idea for a music festival!

Jeans and a tank looked anything but boring on Kaia, who paired baggy pants with a tight, square-neck top, thus creating a ‘90s-inspired look.

The model stopped by Revolve Festival in a blue off-the-shoulder dress and green boots, but the highlight of her look were those long printed gloves.

The model munched on McDonald's french fries in another tie-dye look, this time pairing a dress with combat boots.

Later on, the model gave us western vibes with her cowboy boots and leather pants.

Despite her semi-sheer dress, it was Paris' accessories — like those embellished sunglasses and her cat ears — that made us do a double-take.

The rapper looked cool and colorful when she stepped out in a cape-like jacket and pink sneakers.

The model gave her Levi's denim a sexy twist with a lacy corset top, Jennifer Fisher hoops, and a Jack Vartanian chain necklace.

Save for the crop top, we wouldn't be too shocked to see someone wearing Gigi's beige ensemble at the office. Very business-casual-meets-cool!

Double denim, a bucket hat — this Coachella outfit was quite the throwback.

Selena posted her Coachella outfit on Instagram, showing off her sheer, ruffled dress and layered necklaces. (Plus, check out that crimped hair!)

At H&M's Coachella bash, the actress kept things sweet and simple in a blue sundress and espadrille sneakers.

The singer went with a neon, see-through, mesh-like, collared dress, which was styled with white sneakers.

Emrata turned her matching polka dot set casual with the help of some Nike sneakers.

While Rowan's ruffled top and clear yellow belt caught our eye at first, it was impossible to miss her pink and purple shoes.

The star went with a printed look and stuck to her signature style, finishing things off with a hat.

The Coachella pro skipped fringe and cutoffs this time around, going with a fuzzy pink jacket and metallic pants instead.

One word to describe this combination of neon pieces, logo mania, and fuzzy pants? Fun!

The singer showed up to Levi's Neon Carnival in an oversized fuchsia sweater dress, chain necklaces, and a pair of hoops.

Gigi hopped on board the tie-dye trend thanks to her vest, and made sure to add a bunch of colorful necklaces to complete her look.

Halsey also went with a tie-dye look, and we really appreciate the fact that her shoelaces matched her shades.

A Canadian tuxedo becomes even cooler when the jacket is cropped and shoe choice is pair of black, western-like boots.

The actress partied at Revolve Fest in a fringed, crocheted dress, black boots, and an embellished belt.

The model was the epitome of cool while attending the Revolve party in her denim skirt and sneakers.

Kate's all-white look got a pop of something extra when she added some platform slides.

Not only did Winnie's pink, feathered duster match her pants, it also matched her hair. 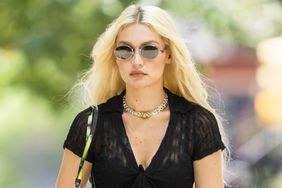 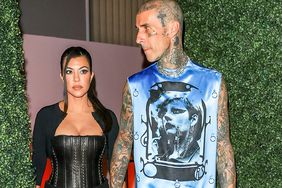 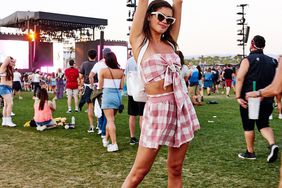 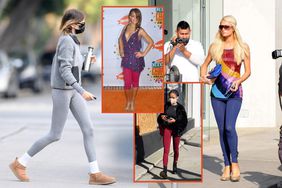 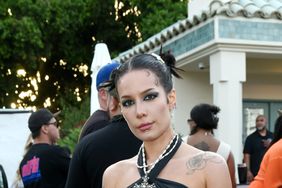