I'm unsure what led me to scanning through photos from 2002 — maybe I was searching for trends that have resurfaced, or looking at Jennifer Aniston's throwback looks — but suddenly, I found myself staring at a shot that needed to be shared. It was Brad Pitt attending the 2002 Sundance Film Festival wearing ... a top hat? And an orange sweater? "Strange," I thought, looking at the actor's statement-making outfit. I'd always pictured Pitt as one of those guys who could pull off any look, and yet here he was, falling victim to the questionable clothing of the aughts.

Further research proved that this was not a one-time thing. In the year 2002, Brad dressed — and I mean this in the nicest, most empathetic kind of way, because none of us was immune to bizarre trends at that time — terribly. He wore cowboy hats on the red carpet, and he didn't seem to be in possession of a steamer or an iron. These days, the guy still loves staples like caps and sunglasses, but the pairing he wore that year were nowhere near as polished as the ones he wears today.

So, let us travel back to the early years of the millennium, mostly as a warning. We'll accept the return of daisies and bubble skirts, we may even be open to discussing the possibility of low-rise jeans. But we've got to draw a line somewhere, and Throwback Brad has shown us where it should be.

At the Golden Globes

I definitely owned a few pairs of these ombré shades, which I probably bought from my then-favorite store, Claire's. Would I have worn them to the Golden Globes, though? Ehh...

At the Premiere of Full Frontal

Brad, is that you? Apparently, the actor grew this scruffy beard for Darren Aronofsky's The Fountain, but ended up leaving the project later on. It's very possible that this new facial hair inspired a more laid-back aesthetic — one that included a cowboy hat and patched up jeans.

At the Premiere of Bourne Identity

Polished and professional, with a bit of flair. This outfit isn't terrible, but it does make me wonder if he's about to play some sort of musical instrument.

The Premiere of The Good Girl

If you're struggling to remember The Good Girl, it's important to note that Jennifer Aniston STARS in it, and it was a breakout role from her bubbly Friends character (she disastrously falls for a young grocery clerk played by Jake Gyllenhaal). So this is what Pitt wore to his girlfriend's big, big night. We all knew a guy who bought black button-downs at Express, then paired them with jeans and black dress shoes for a fancy occasion. We just didn't know that guy was also Brad Pitt.

At the Premiere of The Transporter

The beard is gone! But now, the fun hats have transformed into a backwards cap, and the actor has incorporated leather peacoats into his wardrobe — a very aughts staple.

At the Premiere of Confessions of a Dangerous Mind

Remember, in 2002, when T-shirts with random made up businesses and teams were all the rage? Brad remembers. So does Charlize Theron.

Technically, we've moved on to 2003, but does this outfit not look like something that the cool kid on your school's baseball team would wear? He loves Gatorade/Red Bull and weirdly carries his backpack everywhere. He is a borderline bad boy but also gets good grades. You have a crush on him, and it doesn't feel good. His name is...Brad! 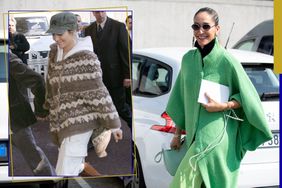 We've Been Home With Our Blankets for so Long, of Course Ponchos Are Coming Back
Jennifer Garner Has Been Wearing the Same Sweet Yet Simple Outfit for 22 Years 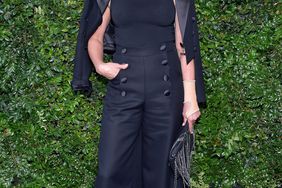