He treats the red carpet like a runway (and we love it).

At least once every award show, someone steps out in an outfit so stunning, it makes us audibly gasp and want to jump out of our seats. Usually, it's Billy Porter who's causing this chaotic reaction. The Pose actor — who can also be seen playing Fab G in the new Cinderella! — doesn't shy away from elaborate designs, and tends to treat the red carpet like a runway.

Over the past few years, we've seen Porter wear voluminous gowns, the highest of heels, tons of tulle, and vibrant pops of color. And, of course, we could never forget his golden Met Gala wings. Somehow, each ensemble — many of of which were styled by Creative and Fashion Director Sam Ratelle, who worked with the actor up until July 2020 — manages to be more dramatic and eye-catching than the last. While it's nearly impossible to pick our favorites, we've compiled a list of our top 10 which will no doubt go down in fashion history.

A while suit would have been bold enough on its own, but the feather train on this Alex Vinash ensemble truly took it to a new extreme — in the best way possible.

Not only did pink and red prove to be a show-stopping color combo, but Porter's Celestino Couture suit was also created from an old curtain backdrop from the Broadway production of Kinky Boots, aka the show that earned him his 2013 Tony.

While the floral-embroidered Dapper Dan x Gucci cape might catch your eye at first, you won't want to miss Porter's platform boots, which perfectly completed the look.

This bright blue, fringed outfit made for some spectacular photos, but the real treat was seeing it in action. Designer Scott Studenberg of Baja East collaborated with Sarah Sokol Millinery and Smooth Technologies to create a motorized hat, giving Porter the ability to open and close it like curtains on the carpet.

Porter seemed to channel a golden statue as he made his way down the carpet, looking as regal as ever in a statement-making Giles Deacon look and platform heels.

It was a history-making night for the actor, who took home the Emmy for Outstanding Lead Actor in a Drama Series, and he took the time to shine — literally. His sparkling Michael Kors suit was styled with an elaborate wide-brim hat, which playfully tilted up on one side.

If anyone knows how to make an entrance, it's Porter. He really brought the glamour in this voluminous, red, sheer Celestino Couture gown, which trailed behind him as he walked.

Business on top, party on the bottom — that's the perfect way to describe Porter's velvet Christian Siriano creation, which was half tuxedo and half gown.

If Porter has a fashion motto, we're betting it's somewhere along the lines of 'expect the unexpected.' After all, the inside of his Randi Rahm cape provided us with the best red carpet surprise, adding a dramatic pop of pink to the actor's embroidered suit.

Of course, a list of Billy Porter's best fashion moments wouldn't be complete without mentioning his 2019 Met Gala look. With a theme like "Camp: Notes on Fashion," we knew the Broadway star would wear something dramatic, but with a pair of golden wings and six escorts, he made sure we got a full show we'd never forget. 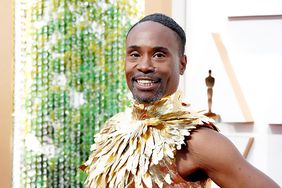