This former Disney phenom is about to take flight! Actress Bella Thorne, who stars in the romantic comedy Blended alongside Drew Barrymore and Adam Sandler, also shows off her gorgeous face in our June issue. For the shoot, Thorne donned this season's ornate, moody designs by Dior (pictured above), Louis Vuitton, Dolce & Gabbana, Valentino, Erdem, Marc Jacobs, and Roberto Cavalli (looks she calls "Tim Burton meets Barbie doll"), and the young fashionista also gave us a peek into her jam-packed life.

With everything she has going on, it's hard to imagine 16-year-old Thorne getting much sleep these days—aside from her role in Blended (in theaters May 23), the young star has almost 16 million social media followers, is writing a young adult novel called Autumn Falls, currently acts as the face of Neutrogena, is hard at work on her first album, and to top it all off is designing a line of quinceañera dresses as a nod to her Cuban heritage.

Best known for Shake It Up, a Disney Channel television show Thorne starred in for three years, she doesn't plan to to twerk her way to adulthood like others who have preceded her. "I don’t really like to go out," she tells InStyle. "I love to sit in my bed and watch Netflix and eat Top Ramen." One sure sign she's not yet an adult? Her silly nickname, Pickle, which was given to her by Blended co-star Drew Barrymore. "We would yap over hair and makeup forever, total girls," Barrymore says of their time filming. "I feel like somewhere between a mom and a sister to her. I can't remember why I started calling her Pickle, but that's what she'll be for life."

Thorne may play a makeup-free tomboy (who eventually gets a makeover) in Blended, but fashion sense is one thing the actress isn't short on in real life. "She has impeccable style," Barrymore tells us. However, Thorne isn't the only one who can take credit for her adorable-yet-chic red carpet looks. "My mom still weighs in on what I wear," Thorne says. "She likes longer, and I like shorter."

We love her off-screen ensembles so much that we asked the actress to dish on the best outfits she's ever worn—see Bella Thorne's favorite red carpet looks in our gallery now!

To see Bella Thorne's full fashion feature and interview, pick up the June issue ofInStyle, available on newsstands and for digital download now.

"Because of the see-through mesh, this dress looks like it's hanging on me. I saw that in a lot of runway shows, and I love it," Thorne tells InStyle of this House of Ronald dress she wore to a LoveGold cocktail party. "It looks like the stones are attached to my body, and I like that the top looks like it's painted on me. Plus, there's a cool gem print on the bottom."

"I love a good crop top and skirt!" Thorne says of her Bec & Bridge ensemble from Cartoon Network's Hall of Game Awards. "My hair was also really cool: a fishtail braid up to a bun with tiny chains woven through it."

"My mother picked this dress out. She loved this! I liked it better from behind because it has a bow and low back that make it less covered-up," Thorne says of this Kate Spade frock she wore the premiere of Winter's Tale in New York City. "Sometimes people think redheads can't wear pink, but honestly sometimes pink looks best with my hair color."

"I was a little afraid of what people would think of this look that Miu Miu picked out for me," Thorne says of her outfit from the Miu Miu Women's Tales 7th Edition Spark & Light screening by the label. "When I tried it on with my hair down, I looked like I was serving food at a Latin bar. But, when I put my hair up in a weird topknot of multiple buns, it changed the whole feel of the outfit and made it more sophisticated."

"This was very risky! I thought you'd see a model wearing this, not an actress, and I wanted to change that," Thorne tells us of the Diane von Furstenberg jumpsuit she wore to the designer's fall 2014 runway show. "It fit me perfectly with no alterations. Choosing the shoes was hard, and these ones didn't fit—my poor little toes—but I had to have these shoes because nothing else matched the feel as well. I wanted a '70s jungle feel, so I had lots of little random dreadlock braids throughout my hair."

"I wanted to wear a different outfit, but everyone chose this—my mom, my manager, and Tania, who does my hair and makeup—and I'm glad they did," the actress says of this Lacoste look she wore at the brand's fall 2014 runway show. "I was worried people would think it was too mature and that the crop top was too predictable." 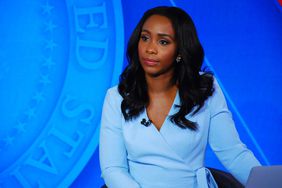