The Battle of Versailles may not be taught in history class, but it should be.

A few years ago, director Ava DuVernay recalls being asked, “Do you know about the time that Black models saved American fashion?” Immediately, the award-winning filmmaker was hooked.

While the Battle of Waterloo and the Battle of Gettysburg have been seared into our brains as moments that changed history, there is another — albeit, far less violent — showdown that represents a turning point in history: the Battle of Versailles fashion show. “The thing is, not a lot is recorded about it,” DuVernay told InStyle in January. “It's all in people's memory.”

While there are many who may be unaware of the 1973 Battle of Versailles and its importance, that will hopefully change, as DuVernay is in the process of turning this creative combat between two nations — France and the U.S. — into a film for HBO. The show was the first time that the American fashion industry was granted respect by its international peers, "and I just think that's fascinating,” says DuVernay, who is currently writing the script based on fashion journalist Robin Givhan's 2015 book, The Battle Of Versailles: The Night American Fashion Stumbled into the Spotlight And Made History. “When you delve into the story, it's fascinating the way that race and class and gender played a part in the architecture and the foundation of our current American fashion industry. You can trace a lot of it to that moment.”

So, what exactly is this overlooked cultural touchstone? Well, the year was 1973, and the legendary Palace of Versailles — once the home of France’s infamously over-the-top Louis XIV — was in dire condition. In order to raise money for the restoration of the Palace roof, taste-shaping publicist Eleanor Lambert, who founded both New York Fashion Week and the Met Gala, devised an idea to put on a fashion show: a friendly competition that would pit the crème de la crème of French haute couture – Yves Saint Laurent, Pierre Cardin, Emanuel Ungaro, Christian Dior, and Hubert de Givenchy – against the top five American ready-to-wear and sportswear designers – Oscar de la Renta, Stephen Burrows, Bill Blass, Halston, and Anne Klein.

“Everyone thought this was a joke,” says fashion expert Marcellas Reynolds, author of Supreme Models: Iconic Black Women Who Revolutionized Fashion. “They thought it was a lock for the European designers, because they were couturiers. When you think couture, you think craftsmanship and history. Sportswear implies that it's here today, gone tomorrow.”

At the time, the American fashion industry was considered by its French counterpart to be the apprentice to their master, but on the home front in the U.S., sportswear was a thriving industry. “Let's not joke about these designers who were making millions of dollars,” says Reynolds. “Anne Klein wasn't pushing the boundaries of fashion by any stretch of the imagination, but she was making money.” The fashion show at Versailles became an opportunity to show the world exactly what American fashion designers were capable of — Lambert was keenly aware of what kind of publicity an underdog victory would achieve, adds Reynolds. “If five American sportswear designers beat five French high-end luxury designers, that's a story [press] can get behind.”

To show their collections, the American designers hired 42 models, ten of them Black women — a radical feat. “It was the first time that most Europeans would have seen that many Black models at once on the stage,” says Reynolds. “Europe has always been, as far as fashion [is concerned], a place where Black models thought they could go and work more than they could in the United States. That's a fallacy. There were a couple of models that broke through, like Dorothea Towles, in the late ‘40s, and Helen Williams, who was the first dark skin Black model to do the European shows. But the doors of Europe were closed to Black models before the Battle of Versailles.”

Much like Black models were a rarity in Europe in the early ‘70s, representation was also difficult to find in the U.S., as the the idea that there was only room for one Black girl per agency, through which print jobs were booked, was pervasive. However, this was not the case on the runway. 7th Avenue girls, as they were called, were fit models and runway models that worked closely with the fashion designers, and, because they lacked representation, were often introduced to the designers socially through stylists and make-up artists, or they were discovered on the streets of New York City. African American models like Pat Cleveland, Billie Blair, Toukie Smith, Alva Chinn, and Bethann Hardison weren’t just showing clothes to clients — to designers like Halston, Burrows, de la Renta, Giorgio di Sant’Angelo, and Willie Smith, they were muses. “Those were the girls that worked for the designers every single day and danced the night away with them,” says Reynolds. “These girls had real relationships with the designers and would have gone anywhere with them.”

But not everyone in the fashion world was eager to be part of the Versailles show. In fact, the well-known models of the time, including Lauren Hutton, turned the gig down. “They invited these big time, glossy girls to go along, but they didn't go because the pay was so low,” says Cleveland, who was compensated $300 for the week. Another reason why editorial models would not have traveled to Paris was because in the early ‘70s, runway and print were two separate worlds. “There was a separation of church and state,” explains Reynolds. “Agents did not want their print girls doing runway because it was considered low-end."

Indeed, once in Versailles, the conditions were difficult to say the least: It was a chilly November day, the girls were bunking together in small hotel rooms, there was no food backstage, and, famously, no toilet paper. “That's why the 7th Avenue girls did such a good job, because they weren't spoiled,” says Cleveland. “That's showbiz; the peacock has a back side and a front side.”

Nevertheless, the end result was fabulous. Following a two-and-a-half hour grand but static presentation by the French, the 30-minute show that the Americans put on felt like a party in comparison. “People wanted a spectacle and the Americans gave them that,” says Reynolds. Long-time Paris resident Josephine Baker opened the show, while Liza Minnelli, fresh off her Oscar-win for Cabaret, closed the show with a number that included all the models voguing. “These girls didn't walk down the runway, they danced down the runway,” says Reynolds. “Before we even coined the term performance art, they brought the clothes to life.”

The five collections took the 700-person crowd, which included celebs like Princess Grace and Andy Warhol, by surprise. Blass brought back the elegance and flamboyance of the jazz era; Klein, who at the time was dying of cancer, presented an Africa-inspired collection that was the culmination of her life’s work; De la Renta created a classically beautiful silk crepe collection, set to the music of Barry White; Burrow’s sexy collection was art and ‘70s culture combined.

For his portion of the show, Halston told Cleveland to go out on stage, and “be a moth” for him. Cleveland performed a series of pirouettes in her chiffon dress that nearly landed her in the audience. “I could feel through my feet that I was on the edge,” she says. “I could hear the audience go, ‘Oh!’ They thought I was going to fall off the edge. I was just playing with them. It's so much fun to get a little thrill.”

“The dresses that these girls wore, during the Battle of Versailles, had been fit to them,” says Reynolds. “The designers knew their personalities, so they weren't just designing a collection, they were like, ‘This is perfect for Pat, Bethann's going to kill this, Alva's going to slay this.’ That's how they won.”

Those who were at the event could feel the impact on the French fashion scene immediately, says Cleveland. Moreover, the dynamic performance of the ten Black women opened the doors to Black models on the European catwalks. “After [Versailles] they couldn't get enough of those girls,” says Cleveland. “It was mostly 7th Avenue girls that were coming to Europe after '73, and they were very welcomed. Things were changing. It all had to do with the music, dancing and the fun that people were having. It brought a liveliness to everything instead of just being in a couture house that was very silent; ladies having tea and looking at girls walking around the room.”

On a larger scale, says Reynolds, the presentation paved the way for the Black women in fashion that we now consider groundbreakers. “The milestones literally are: The girls from the Battle of Versailles, then Iman, then Naomi. Iman became the first editorial girl to really kill it on the runway. Then there's Naomi who conquered both worlds equally,” he says. "If there had not been those ten girls during the Battle of Versailles, there'd be no Naomi Campbell. It was a defining moment.” 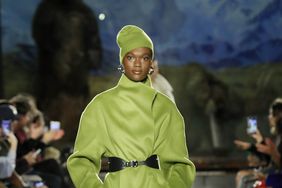