Meet the new Ariana Grande. For her Dangerous Woman world tour, which kicked off on Friday in Phoenix, Ariz. and will run until June 17 in Italy, the pop princess shed her usual on-stage constants (though not completely; don't worry, her high pony is still there)—you know, the flirty skirts, the cutesy, girly aesthetic—and found a new look in streetwear.

"It's about making an adult Ariana, marrying her silhouette with what's happening in fashion right now, so a big theme is sportswear—everything is oversized, there are straps everywhere, and cool hardware," says designer Bryan Hearns, who worked closely with Grande's stylist Law Roach to whip up two of the five looks for the tour. "It's definitely more edgy, it's more adult, but still playful and young."

He compares her new style with Rihanna's, a vibe that's more cool and relaxed, versus something "done." There are sporty crop tops styled with baggy pants that's reminiscent of TLC in the '90s (aka her new preferred silhouette), monochromatic outfits in neutral shades (white, gray, and black mostly), and a mix of buzzy labels layered in, including Balenciaga, Off-White, and Vetements. "Even the way the music is cut, it's very different," Hearns goes on to say. "It's not like the original songs, it's more trap. There's a good mix to it."

What he definitely wanted to steer clear of: high-shine sequins, over-the-top embellishment—basically, any form of flashiness typically found in traditional performance-wear. He pauses. "Well, there is one look, where she's wearing a huge diamond choker," he says. "But it's done in a very chic way—really modern."

He's talking about the opening look, which was a nod to her old aesthetic. Inspired by Audrey Hepburn, the look features a high-neck bodysuit with a half skirt that sits on top—a look that he designed the day before the show. "I flew out the day before, and we were told to create a new look," Hearns says. "I slept for four hours. It was stressful, but it was exciting. It was awesome."

From sketch to stage, see Grande's Dangerous Woman looks, below.

Designer Bryan Hearns drew inspiration from Audrey Hepburn with a diamond choker, a high-neck bodysuit, and a flirty skirt on top. The look, as it turns out, was designed the day before the show. "I flew out the day before, and we were told to create a new look," Hearns says. "I slept for four hours. It was stressful, but it was exciting. It was awesome."

The modern-day, streetwear take on the Audrey Hepburn look: OTK boots and an oversize bomber dragged off the shoulders.

In a nod to the '90s, Grande channeled her inner TLC with a look by Off-White c/o Virgil Abloh: a bra-on-bra top and billowing Levi's x Off-White jeans.

"This whole look is custom," Hearns says. "It's definitely more edgy [for Grande]. A big theme is sportswear—everything is oversized, there are straps everywhere, and cool hardware."

"Most of the looks are monochromatic in white, gray, and black," Hearns says. "I definitely wanted to stay away from anything with crystal and sequins."

Including lace-up baggy track pants and a matching jacket.

It's a micro mini in the sketch, but when brought to life, the black patent trench coat was lengthened to look like a badass, femme fatale ball gown. 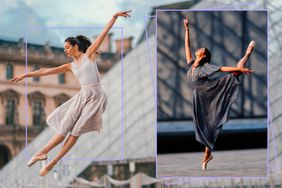