Nobody does red carpets quite like Anya Taylor-Joy, and she continues to surprise us with her fashion choices. So her latest red carpet appearance for her film Last Night in Soho is no exception, as the actress wore a mesmerizing gown that was both futuristic and classic (a little foreshadowing of the film, perhaps).

On Sunday, Taylor-Joy attended the premiere of her new psychological thriller film Last Night in Soho where she wore a stunning metallic gold dress with a massively plunging neckline that cut all the way down to her midsection. The pleated dress was belted in the waist with a gold rope before flowing into a full skirt embossed with a design that looked like arrows.

In our October cover story, Taylor-Joy recalled how strange it was to dive into her Last Night in Soho character, especially coming off of her film Emma.

"The strangest thing about playing Sandy was I had finished Emma the day before," says Taylor-Joy. "To go from being in a corset, being very prim and proper, to suddenly being in a room where everyone's touching each other and I'm making out with this dude…I had to exorcise Emma very, very quickly."

Taylor-Joy costars in the Edgar Wright film alongside Thomasin McKenzie in a 1960s and modern day London where she plays an aspiring singer with an ill-fated future who appears in the dreams of McKenzie's character. The movie hits U.S. theaters this Friday, October 29. 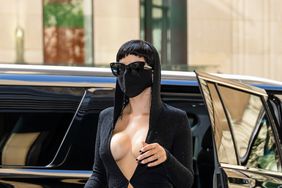