We honored the Hanifa designer with an InStyle Award — the day before her first runway show.

Every year, we celebrate the biggest names in fashion and entertainment by bringing our favorite culture-movers together for one big event: the InStyle Awards. This year's event took place yesterday, November 15 at the Getty Center in Los Angeles — a foggy and no less fun celebration to make up for lost time and tip our caps to the best of the best. Our InStyle Awards Future of Fashion honoree is Anifa Mvuemba, founder of the celeb-beloved fashion line, Hanifa. Her boldly colored designs have been featured on multiple InStyle covers in recent years, and now she's gearing up for her first-ever runway show, todayat the National Portrait Gallery in D.C., where she will present her Fall/Winter 2021 collection "Hanifa Dream." (Yes, it'll be livestreamed at 8 p.m. for anyone who can't make it in person.) But this wasn't always the plan.

Just as we missed the InStyle awards last year, the pandemic caused Mvuemba to cancel her first New York Fashion Week show in February 2020 — and she was not going to let the moment pass without taking action. So she logged long hours with design software programs and by May had created a virtual presentation replete with dress forms that would walk down the runway as if a model was wearing them. The Pink Label Congo collection, inspired by Mvuemba's Congolese roots, appeared on Hanifa's Instagram Live and made Mvuemba a breakout sensation.

"[Throughout the pandemic] we saw losses and closures, and for me it was a survival moment," the designer said, in our November issue. "When I woke up the next day, Instagram was going crazy, DMs were going crazy, sales were going crazy, and we were just like, 'What is going on?' It was so surreal."

Everything You Missed at the InStyle Awards

The innovative show catapulted Mvuemba into the mainstream, increasing the brand's social reach to over 365,000 Instagram followers, including big names like Naomi Campbell and Gabrielle Union. Her rise to prominence is even more impressive when you consider that Mvuemba has always seen herself as an industry outsider. She established Hanifa in 2012 after dropping out of a fashion merchandising program at Maryland's Morgan State University but, overwhelmed by the workload, shut it down three years later and was in and out of retail jobs. "When I was working at Nordstrom, I could not get away from followers and former customers coming up to me and asking about [Hanifa]. I was like, 'I'm trying to run away from this thing,' " says Mvuemba, who had posted early pieces from the line on Instagram. "I remember saying a prayer: 'Lord, if this is what you want me to do, I'll do it. But I'm not quitting again.' I came back, and I've been running since."

"I design to make women feel like they don't have to say a word when they walk in the room because everyone's looking anyway," says Mvuemba. "Every time I see someone wearing my designs, I love the confidence in how they walk, talk, and pose. That's the Hanifa woman."

All the Best Beauty Looks from the 2021 InStyle Awards

Mvuemba's mother is her ultimate muse. As a child she raided her closets for the well-tailored suits that would become the foundation for Hanifa's formfitting garments. Nowadays Mvuemba can find inspiration in almost anything. "I could be on a flight and see a cloud and think, 'That would be a really nice skirt,'" she says. "But when I'm in my zone, I have to be alone — I can't be flustered. I can't be stressed." Who's on her chill playlist? "Jhené Aiko. She just sets the tone."

Grateful for her own opportunities, Mvuemba is paying it forward. She's a member of the Black in Fashion Council and has started a mentoring program for other emerging designers called Concepts by Anifa Mvuemba to steer the industry toward inclusivity. Though she has a full plate, lifting as she climbs hasn't kept her from reaching new heights herself: Mvuemba will show a new collection later this fall and also plans to delve further into the tech-fashion fusion projects she's known for. "I've always been this tech girl. It's amazing that I'm able to do tech and fashion," she says. "I wear a lot of hats, and I get it done every single day."

VIDEO: See The Best Moments From the InStyle Awards 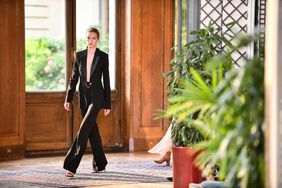