Alex Morgan is known for many things — winning the World Cup as a member of the U.S. Women’s National Soccer Team, taking home the award for Best Female Athlete at the ESPYS, becoming the Internet’s new favorite meme, etc. — but it should be noted that she's also a fashion icon. We’ve seen her wear everything from curve-hugging minis to semi-sheer gowns, and she only further solidified this title ahead of an appearance on Jimmy Kimmel Live.

While out in LA, the athlete was spotted wearing a structured, sleeveless orange Pinko suit. She showed some skin — plus her very toned arms! — by skipping a shirt and wearing nothing underneath, then completed the look with silver platform heels, a white Hublot watch, and a black scrunchie (so very Jason Momoa of her). Morgan also slipped on a pair of round, oversize shades to block out the sun, and seemed to take a tip from Gigi Hadid by adding a sunglasses chain to the piece.

Still, Morgan wasn’t done showing off her impeccable taste in clothing. Later on while leaving the show, she seemed to hop aboard the fashion clown trend, quickly changing into a pair of polka-dot pants, a simple black tank, and black sandals. Both outfits were powerful, fun, and sexy all at the same time, and we're definitely feeling inspired to recreate them for ourselves, ASAP. 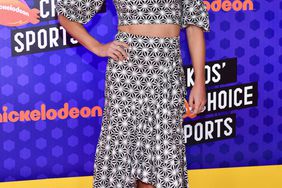 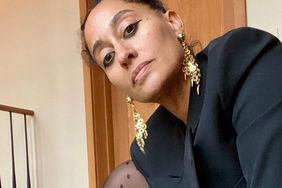 15 Trends to Try This Spring, According to Stylists and Fashion Experts
Dakota Johnson's Best Outfits Consist of Sexy Lingerie, Sequins, and Sneakers
Jennifer Garner Has Been Wearing the Same Sweet Yet Simple Outfit for 22 Years