In case you're living under a rock: The Grammy's are in New York Freakin' City this year. And that's a big deal. Such a big deal that brands as big as Bulova (you know, that watch you ask for every Christmas) are celebrating by creating unique products to celebrate the move to the East Coast and the award show's 60th anniversary.

Teaming up with the Recording Academy, Bulova has created a limited edition timepiece that will be gifted to each of the winners this year. Yes, that's right, Kendrick. There is a very good chance you'll be going home with a brand new shiny watch.

"This timepiece was a year in the making," Susan Chandler, Chief Merchandising Officer, Citizen Watch America, exclusively tells InStyle. "Since the Grammy's is returning to New York City and knowing the influence New York City has had on the music industry, New York City became the main design inspiration. We channeled this through specific details such as combining the grammium gold with the music wavelength featuring the NYC skyline on the dial, as well as using a gray coloration for the strap and case finish, keeping in line with the eponymous 'concrete jungle'," says Chandler.

And yes, you read that right. The watch is made from grammium, which is the same alloy used to make the actual Grammy awards. I can't.

You don't have to be Lady Gaga or Jay-Z to wear the watch. The timepiece will be available for purchase exclusively at Macy's Herald Square and macy's.com. The catch? There will only be 60 produced, and we expect these bad boys to sell out quickly. So run. Don't walk.

VIDEO: Coinage: Olympics 2018: The Winter Games by the Numbers 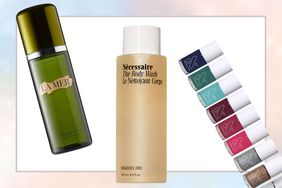