It’s inspired a Broadway musical, countless couple Halloween costumes, and Bey and Jay’s ride or die duet. This weekend, exactly five decades have passed since the 1967 crime thriller Bonnie and Clyde officially hit theaters, and the dynamic duo’s chic outlaw looks are still influencing our style on the regular.

The classic film, which stars Faye Dunaway as Bonnie Parker and Warren Beatty as Clyde Barrow, is, of course, a take on the real-life Great Depression-era bank robbers, but when director Arthur Penn brought the story to the big screen, he added a major dose of classic 1930's style.

The costumes, designed by Theadora Van Runkle, go down as some of the most memorable in cinema history. But the main reason we love them is that they weren’t costume-y at all. Bonnie’s ladylike pencil skirts, knit sweaters, and wool berets were a delightful foil for her ultimately sinister motives, and yet they're still completely wearable and polished almost a half a century later. As for Clyde? Bonnie couldn't have wished for a more dapper partner in crime. It’s no wonder the film was nominated for an Oscar that year for best costume design.

In honor of the 50th anniversary of Bonnie and Clyde, we’re looking back at some of the movie’s most iconic looks, below. Want a closer look? Catch a special showing of the film this Wednesday, August 16 in theaters nationwide. Visit fathomevents.com for more information.

Scroll down for wardrobe envy.

In perhaps the most iconic look from the film, Bonnie and Clyde leaned heavily on the classics. His pinstripe double-breasted suit was tailored to perfection, while her ribbed knit sweater, tweed pencil skirt, silk scarf, and wool beret were criminally chic.

She always showed a knack for neutrals, made evident by this cream blouse and black jacket.

Bonnie's tan, high-waisted pencil skirt was incredibly sleek, if not so easy to run in. And Clyde's crisp, white button-down and vest was just as smart (and likely restricting).

A breezy long-sleeve dress in a graphic print was one of Bonnie's most arresting looks.

The 50 Best Fashion Tips of All Time
Ok, We Just Realized Zoë Kravitz's Best Outfits Include the Same Subtle Detail 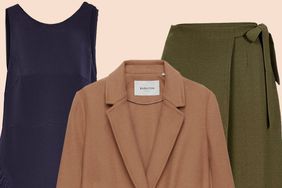 How to Create the Perfect Workwear Wardrobe