In My Best Friend's Wedding, Julianne (Julia Roberts) was secretly in love with her best friend-the groom-who was getting married to a peppy blonde (Cameron Diaz). Solution? Turn up the va-va-voom! Julianne worked a draped lavender gown that accentuated her shoulders. In a dress that stole the scene from the bride, it's hard to believe she didn't win her guy back in the end!

Trying to ignore the gossip that her family inspired The Graduate, Rumor Has It's Sarah (Jennifer Aniston) focused her attention on the upcoming nuptials of her sister, Annie (Mena Suvari). As maid of honor, Sarah sported a lilac cocktail dress with a tulle overlay and crisscrossed bodice.

In Wedding Crashers, Owen Wilson's John Beckwith crashed weddings for the women-until he met Claire (Rachel McAdams), sitting pretty at her sister's affair in a sweet neutral number with a draped back. Loose curls completed her easy look for the outdoor setting.

For Lillian's (Maya Rudolph) big day in Bridesmaids, the five girls in her wedding party (including Kristen Wiig, Rose Byrne, and Melissa McCarthy) wore tiered amethyst gowns from a fancy (and fictional) French clothing store. But for the promotional photos, the girls picked something sassier: neon pink peplum minidresses.

Always a bridesmaid, never a bride-that was the theme of the 2008 romantic comedy, 27 Dresses. Jane (Katherine Heigl) had been a bridesmaid in 27 weddings-and had all 27 colorful bridesmaid dresses tucked away in her Manhattan apartment to prove it! In one extended scene, she tried each one on for her love interest, Kevin (James Marsden), including this strapless blush gown with a bustle at the hip.

To reference another iconic teen film by John Hughes, Sixteen Candles's Samantha Baker (Molly Ringwald) looked pretty in pink as her sister's bridesmaid-even if everyone in her family managed to forget it was her 16th birthday. Luckily for Sam, her crush remembered, and they shared birthday cake on her dining room table while she remained in the pink chiffon gown, cinched at the waist with a mauve ribbon and topped off by a flower crown.

Rachel Getting Married earned Anne Hathaway her first Oscar nod-and a serious style moment as Kym, the unpredictable sister of the bride. As maid of honor at the Indian-themed affair, Kym honored the groom's traditions by layering an embroidered periwinkle sari with a shimmering knit.

My Best Friend's Girl's Alexis (Kate Hudson) may have had trouble choosing who to love, but selecting a dress for her sister's wedding was a no-brainer. The actress's romantic off-the-shoulder Amsale gown was a sophisticated and fashion-forward choice.

Based on the best-selling British novel, the 2009 comedy Confessions of a Shopaholic documented heroine Rebecca Bloomwood's (Isla Fisher) shopping addiction-a compulsion so bad, she even tried to sell the hot pink cocktail dress she was meant to wear as the maid of honor in her best friend's wedding. Fortunately, she got it back-technicolor tutu, oversized bow and all-just in time for her friend's big day, and completed her bright style with sling-backs, white gloves and a Dalmation shrug.

While love interest Conner (Matthew McConaughey) was busy with the "ghosts" of his past girlfriends, A Christmas Carol-style, Jenny (Jennifer Garner) geared up for her sister's wedding in a ruched aubergine gown in Ghost of Girlfriends Past.

In When in Rome, unlucky in love Beth (Kristen Bell) jetted off to her sister's destination wedding in Rome, packing her jersey Amsale dress for the occasion. The gown boasted a deep V-neck and ribbon detailing-an elegant design that turned daring when drenched in an Italian fountain post-nuptials.

In Breaking Dawn: Part I, Edward's (Robert Pattinson) little sister, Alice (Ashley Greene), planned his entire wedding to Bella Swan (Kristen Stewart)-down to the Cullen family's wardrobe. For herself, as one of two bridesmaids, she chose a plumed flapper look that she complemented with retro '20s finger curls.

The polka-dotted baby blue dress Nikki (Gia Carides) wore as a bridesmaid in her cousin Toula's (Nia Vardalos) wedding in the comedy My Big Fat Greek Wedding was accented by blast-from-the-past rose poufs and a considerable amount of cleavage. The dress looked oh-so-'80s chic-even though the comedy was set in this decade.

Looking summery and smiley for the backyard wedding of their best friend, Zooey (Rashida Jones), Denise (Jaime Pressly) and Hailey (Sarah Burns) worked sunny bowed dresses for their walk down the asile in I Love You, Man. Talk about love! 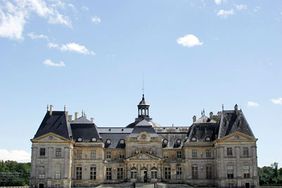