We're a sucker for a good classic, but we also applaud brides who take a risk on their wedding day.

When Olivia Palermo and Johannes Huebl (above, left) decided to tie the knot, we knew that whatever Palermo wore would be of the utmost style and sophistication—because Palermo's style never disappoints. And as we expected, when the two wed just a few weeks ago in New York, Palermo's nontraditional bridal look caused tons of oohs and ahhs—and it wasn't because she was doused in tons of chantilly lace and beaded crystals. Instead, Palermo stepped out in chic Carolina Herrera separates, breaking bridal rules in all the right ways.

But Palermo isn't the first to say "I do" in an unexpected ensemble. Brides have ditched the traditional precedents that says they must wear white on their wedding day. Take a look at Sarah Jessica Parker (above, right)—who's undeniably the queen of successful risk-taking—she departed from traditional white and went in the complete option direction when she chose to wear black for her big day.

But breaking bridal is nothing new—it just keeps getting better. One of the most iconic wedding looks that still stands out today is that of Bianca Jagger's. When the actress wed Rolling Stones frontman Mick Jagger in Saint-Tropez in 1971, she wore a YSL Le Smoking jacket and accessorized with an over-the-top wide brim hat that was complete with a veil. How's that for nontraditional?

To see Bianca's look as well as celebrities who wore pink, lavish jewelry, and unforeseen silhouettes, click through the gallery.

Hilary Rhoda in a Pop of Color

Showing off her sinewy form, Rhoda donned an unconventional choice, in a Carolina Herrera column with plunging neckline lined with jade embellishment. Sweet touches of grosgrain detailing and a dramatic, floor-sweeping veil finished out the modern look.

When word broke out that Olivia Palermo and her longtime boyfriend Johannes Huebl decided to tie the knot, we knew Palermo's look for the big day would be one for the books. For her New York wedding, the impossibly chic style star chose a cream-colored cashmere top, sleek shorts, and a romantic tulle overlay skirt by Carolina Herrera.

Mia Farrow in A Cropped Coat

When Mia Farrow married Frank Sinatra in Las Vegas in 1966, she chose to add a double-breasted blazer jacket to her all-white ensemble. At just 21 years old, Farrow gave the covered-up bridal look-which was modern for its time-a refreshing take when she selected a crisp cut, cropped silhouette with ornate buttons.

Keira Knightley in a Short Dress

Talk about low-maintenance! In a small ceremony in Provence, France, Keira Knightley said "I do" to fiancé James Righton in a no-fuss strapless tulle dress that she paired with a Chanel jacket, ballet flats, and a crown of flowers.

And the Bridesmaids Wore White!

Kate MiddletonaandaKim Kardashianadidn't enforce that "only the bride wears white" rule for their big days! Both brides dressed their sisters in alabaster-hued gowns—andaPippa's dress caused just as much buzz as her sister Kate's. Kim didn't regret her decision to dress her sisters in white for her wedding to Kris Humphries as she did so again for her extravagant wedding to Kanye West.

Bianca Jagger in a Hat

When the actress wed Rolling Stones frontman Mick Jagger in Saint-Tropez in 1971, she accessorized her YSL Le Smoking jacket with an over-the-top wide brim hat that was complete with a veil.

SJP and Shenae Grimes in Black

Both Sarah Jessica Parker ( left) and Shenae Grimes (right) walked down the aisle in black ball gowns. The two nonconformist brides opted for minimal accessories, pulling off the moody hue with style and ease.

Lake Bell brought back flapper fashion when she tied the knot in a lavish Marchesa design. The unconventional creation was complete with a turtleneck, tiers of fringe, and intricate beading. Marchesa designer Georgina Chapman once told us she loves dressing all brides, "but personally, my favorites are those who are risk-takers, who aren't afraid to push boundaries.”

Kaley Cuoco ( left) and Gwen Stefani (right) proved that they are not afraid to take a risk on their wedding day when they walked down the aisle in pretty pink wedding gowns. Cuoco went for an all-pink strapless ball gown by Vera Wang while Stefani opted for a pink dip-dyed number by John Galliano.

For her trip down the aisle, Julianne Moore took the nontraditional route (as did her husband!) when she wore a purple Prada slip dress. The understated silhouette was fit for the actress's family-filled outdoor wedding in New York City, with Moore taking her look one step further when she paired the sleek column with long dangling emerald green earrings. 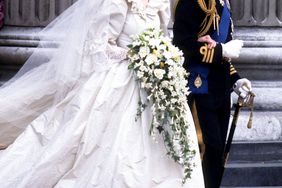 Get Inspired by 6 Celebrity Bridal Styles Through the Ages 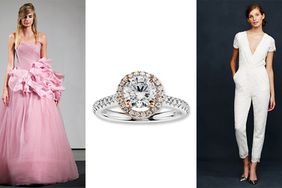 Wedding Rules You Should Break