When you grow up with Lenny Kravitz and Lisa Bonet for parents, a strong sense of style is bound to rub off. And though actress Zoë Kravitz’s red carpet rotation still nods to her dad’s rocker aesthetic and her mom’s bohemian flair, she has carved out her own niche in the fashion world, too.

“She has such a unique personal style,” says her stylist Andrew Mukamal. “But there is a lot of familial referencing that comes across, often subconsciously, like the style of jewelry that Zoë goes for and just the way she pulls herself together.” Favoring straight off the runway ensembles with sheer detailing and impeccable tailoring that complement her petite frame, Kravitz isn’t afraid to take a fashion risk either. “She is at that point in your twenties when you can really pull off anything,” adds Mukamal. “There is a shock appeal and a youth factor that really drives our choices right now.”

Close relationships with designers like Alexander Wang, whose forward-thinking creations she often wears for events, have also helped shape her look. “Alexander Wang is a close friend and a style sounding board for us,” says Mukamal. “Even when she’s not wearing something he made, he is often a part of the conversation because he has an incredible understanding of fashion.

And at the end of the day, “getting dressed for the red carpet should be exciting,” adds Mukamal. “And sometimes you have to push boundaries if you want people to take notice.” See Kravitz’s 10 best looks of all time below.

Zoë Kravitz Is a Flip Cup Master, Even in an Inflatable Suit
01 of 10

The star shines in thousands of Armani Privé sequins at the Venice première of Good Kill. “I wanted her to have a wow moment,” says Mukamal. “It was the best she has ever looked.”

The night after Kravitz walked the Balenciaga runway in this sheer lace number for pal Alexander Wang’s final collection, she wore it again in Paris. “It already fit her flawlessly, so it was a no-brainer,” says her stylist.

“For the Mad Max: Fury Road L.A. première, we looked for something really badass,” says Mukamal. With its golden embroidery and fur accents, this Valentino gown is a clear winner.

“As soon as Zoë saw this chain-mail dress at the Alexander Wang show, she knew it was right for the Met Gala,” says Mukamal. Ten diamond Chopard rings, totaling more than 50 carats, round out the ensemble.

It took three fittings to perfect the dreamy draping on this gossamer Valentino Haute Couture design she wore to the Cannes Film Festival. “Zoë loved its airy feel,” says Mukamal.

Two of her biggest fashion influences? Actress mom Lisa Bonet and rocker dad Lenny Kravitz. “Zoë throws things on without flinching because she inherited their natural sense of style,” says her stylist. Here, Kravitz puts her own spin on Chanel.

The Divergent series actress selected this satin Michael Kors Collection slip dress for its versatility. “I can sleep in it and go to a party in it,” she tells us.

“When you’re petite, choose clothes that won’t overwhelm you,” says Mukamal. The streamlined cut of this Dior two-piece is well suited to the actress’s 5-foot-2-inch frame, and the house’s pearl and blue crystal choker adds a stunning pop of color.

In a striking Calvin Klein Collection column, Kravitz evokes a less-is-more stance. “To me, simplicity is the key to fashion,” she says.

There’s a lot more to this beaded Balenciaga creation than meets the eye. “It must’ve weighed more than 40 pounds,” says Mukamal. “At first she could barely lift it, but once she got used to it, she was game.” 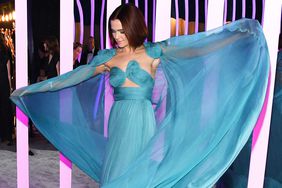