Her style is a little hard to pin down — in the best way possible.

Actress Zoey Deutch has sharp fashion instincts, but that doesn’t mean she’s above making a plan. “Dialectical thinking is a cornerstone of our fittings,” says Elizabeth Stewart, the star’s stylist. “In particular, she puts a lot of thought into her shoes: I call her ‘shoe-ticular.’” Other common threads to Deutch’s choices? “They’re eclectic and unexpected,” says Stewart. “Her look is chicly adventurous — with a dash of Amish grandma thrown in.”

Ahead we've compiled 13 of Deutsch's very best red carpet moments (yes, it was hard to narrow down). Keep scrolling for our favorites.

2020: In Valentino Haute Couture at the Vanity Fair Oscar Party in L.A.

2019: In Tory Burch at a boutique opening in Tokyo

2019: In Valentino at the Tribeca Film Festival première of Buffaloed

2020: In Fendi Couture at the Golden Globe Awards in L.A.

"Zoey and I sparred over the jewelry for this mustard jumpsuit — so many options looked good. But we settled on sapphire and diamond pieces by Harry Winston. They added the perfect pop of blue,” Stewart says.

2019: In Dior at the Guggenheim International Gala in N.Y.C.

2018: In Dior at a dinner at the Château de la Colle Noire in Montauroux, France

2020: In Oscar de la Renta at the Producers Guild Awards in L.A.

2017: In Valentino at the designer’s show in Paris

2019: In Armani Privé at the Vanity Fair Oscar party in L.A. 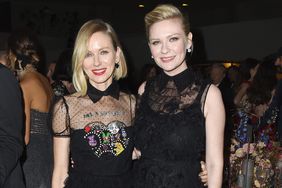