Our Spidey-senses are tingling, because Zendaya and Tom Holland are officially Instagram official. On Wednesday morning the Spider-Man: Homecoming actor posted the sweetest tribute for Zendaya's 25th birthday with a cute snapshot of the newly confirmed couple on set.

In the photo, Zendaya rests her chin on her Spider-Man costar's Spidey-uniform-clad shoulder, and she captured the moment with a mirror selfie using an old fashioned digital camera. The two appear to be in a dressing room on the set of Spider-Man. Holland even has movie makeup scratches and bruises on his face.

The couple's first Instagram together comes a month after the two confirmed their relationship with a car kissing session. Back in July 2017, a source told People that the two were romantically involved but keeping their relationship on the down low.

"They started seeing each other while they were filming Spider-Man," the source said. "They've been super careful to keep it private and out of the public eye but they've gone on vacations with each other and try and spend as much time as possible with one another."

Finally, after years of speculation, denials, and secret dating, we have an Instagram confirmation. Happy birthday, Zendaya! How kind of you to gift us on your birthday. 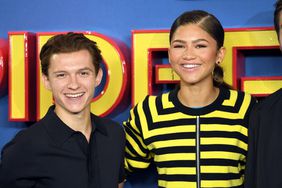