It's the start of something new.

Miley Cyrus isn't the only one rocking a mullet at the moment (we can all just assume that her pops, Billy Ray, has one at all times). In a new post from Australia's Attaboy salon, Zac Efron — Troy Bolton himself — stopped in for a cut and walked out with a mini mullet.

In the photos, Efron is posing with the staff and showing off the start of a mullet, though looking from the front, it's tough to tell. According to Attaboy's caption, it's there.

"@zacefron dropped into @attaboy_hair Kent Town for a tidy up today, so we gave him a mullet," the salon captioned a trio of photos. "He also gave the boss man, Robby, a trim — and made him feel 17 again."

Elle notes that Efron has been living in Australia for most of 2020 and that the country's "coronavirus pandemic numbers are among the lowest in the world." With just 13 new cases added yesterday, Efron's maskless visit to the barbershop seems like a time warp back to pre-pandemic times for much of the world.

"He absolutely loves Australia," Australian radio host Kyle Sandilands said of Efron's move down under. Sandilands added that a new romance could also be a reason for the extended stay. "Well, he's in love with this girl Vanessa [Valladares]. They're lovely. Beautiful couple. They do everything together. They're just really sweet, and they're lovely."

People reports that Efron was looking to buy a house in Australia and that things are getting serious between the two, despite breakup rumors that came up last month.

"Zac and Vanessa are very happy," a source said. "They celebrated Zac's birthday with friends before the weekend. Their relationship is very serious. Vanessa lives with Zac in Byron Bay." 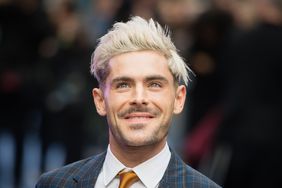