Along with six other epic looks.

Vanessa Hudgens took her MTV Movie and TV Awards hosting gig seriously and, as any good host knows, with that comes several outfit changes. The actress-singer extraordinaire did not disappoint on the fashion — and hosting — front stepping onto the stage in not one, not two, but seven killer looks.

Hudgens's many looks were curated by her longtime stylist Jason Bolden, including a Versace set that featured a demi-cup bra top with gold Medusa head details on the straps and a built-in bandana that hung down her midsection. The top of the black bra and bandana were lined in yellow, gold, purple, blue, and orange fabric printed with the brand's signature baroque pattern. The black miniskirt used colorful safety pins to hold the leg slit closed and tie in the shades from the top, and another silk scarf was attached to the side of the bottoms. Matching gold earrings and a slicked-back bun finished off the look.

The star started out the night in a custom chiffon Vera Wang minidress with a long sheer train that blew in the wind as Hudgens posed on the red carpet. She also slipped into a gold sparkly minidress, a plunging pink off-the-shoulder micro minidress, a Squid Games-inspired rainbow-sequin tracksuit, a super-short latex romper with a fuchsia wig to channel Zoë Kravitz's Catwoman from The Batman, and a cow girl-esque ensemble to reference Cassie's (Sydney Sweeney) Oklahoma! performance in Euphoria.

During the show, Hudgens even compared Euphoria to High School Musical. "Apparently, high school musicals have changed since 2006. Euphoria High does not do it like East High did. There's a lot less singing, a lot more hair pulling, and a lot more cleavage," she joked. 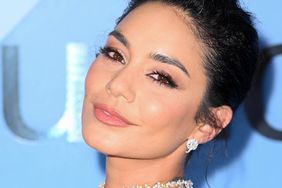