As of Monday afternoon, 58 people were killed and 515 injured. President Donald Trump addressed the nation on Monday, calling the events “an act of pure evil.”

“To the families of the victims, we are praying for you and we are here for you,” he said.

Celebrities immediately took to social media to share their condolences and call for an end to gun violence. Ariana Grande, for instance, penned a touching message, writing, “My heart is breaking for Las Vegas,” adding, “We need love, unity, peace, gun control & for people to look at this & call this what it is = terrorism.”

And while it’s tough to grapple with our emotions in times of tragedy—scared, confused, shocked, angry—certain stars are using the events as an opportunity to share love and support for people everywhere.

On Twitter, Ellen DeGeneres wrote, “It’s unimaginable. And yet it’s real. I don’t know where to begin. Watching, crying, and sending love,” she wrote, adding, “Care. Love. Be outraged. Be devastated. Just don’t give up. The world needs good humans today.” 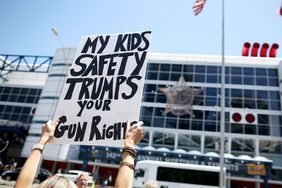