looked to Marc Jacobs for his all-black ensemble, but attributed his signature disheveled 'do to a "nervous tic" rather than a styling technique. "It doesn't take any time at all!" the Brit said, claiming that he gets the look simply by running his hands through his (seldom washed) hair. "I've never had so many people say, 'It must be mousse!'"

The Hollywood premiere of Twilight was a big night-not just for the fans, but for the fashion-obsessed as well. And while they're already famous for giving faces to the characters from the best selling novel, the cast showed off their individual style as they arrived on the red carpet. Leading lady Kristen Stewart had a Cinderella moment in her tri-colored Balenciaga dress. "You end up at these things and you're never wearing your own clothes," said Stewart, who accessorized with a clutch and jewelry from Chanel and classic Christian Louboutin pumps. "The fact that I can borrow [all of this] for a little while is fun!"

-With reporting by Andrea Simpson

Famous fan Camilla Belle showed up to get her Twilight fix dressed in head-to-toe Miu Miu, pairing the brand's burlap-and-satin T-straps with a print dress from the Spring 2009 collection.

"Nothing is mine. I don't do [dress-up] very often, especially not like this," said Nikki Reed, who sparkled in a beaded Marchesa cocktail dress, Rene Caovilla pumps, Neil Lane diamonds and a Kotur bag "that weighs 5,000 pounds!"

-a.k.a. Alice Cullen-complemented her Ina Soltani satin bustier dress with Jimmy Choo shoes, a Kotur clutch and jewelry from Neil Lane. "It's a dream. It's like a fairy tale," the stylish starlet told reporters on the red carpet.

Redhead Rachelle Lefevre played up her fiery locks in a strapless Farah Angsana dress, Neil Lane diamonds and a clutch and shoes from Stuart Weitzman. "I knew they'd be passionate but I didn't know they'd be sleeping on sidewalks!" Lefevre exclaimed as she surveyed the crowd.

"[The character] is kind of hot and kind of sexy. That was fun," said Elizabeth Reaser, who plays the role of vampire matriarch Esme Cullen. On the red carpet, Reaser showed off her real-life sex appeal in a belted frock from British label Burberry Prorsum, accessorized with a Kotur clutch and a Le Vian ring.

used her current status as a tween queen to score tickets to the big premiere, but looked to the past when selecting her little white dress. "I wanted to do something classy from the '40s era," the 16-year old said of her Camilla and Marc dress. Lovato finished the look with bracelets from Alex and Ani.

Apparently unconcerned about the risk of vampire bites or overzealous fans, Taylor Lautner-looking casual chic in a Jean Paul Gaultier suit-skipped the tie and left his neck exposed.

Trendsetter Cam Gigandet broke the rules, choosing a leather jacket and biker boots over a suit. How does the big screen bad boy feel about the adoration he received from both teenaged Twilight fans and their moms? "It's the ultimate compliment," Gigandet said. "I love it."

took a stylish stance on the red carpet, making an entrance in a simple black suit and plaid tie. "I've always wanted to play a vampire," said the young star. "Even before I was an actor I wanted to be a vampire for real." 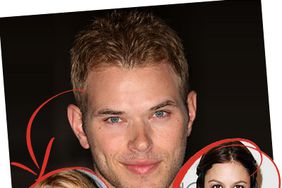 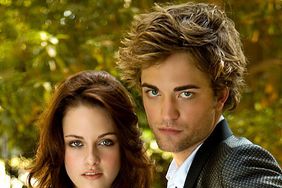 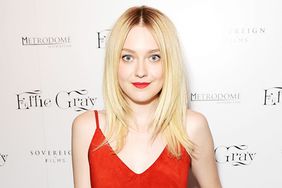