The 24-year-old debuted the boyish crop that made her career. "Sure, I like my short hair," she told People. "It also quadrupled my rate. I did get sick of seeing it on everybody, though-every stewardess, every salesclerk and in every restaurant."

Marilyn, Evangelista-style-the supermodel went platinum, or, as she called it "champagne beige."

A deep brown bob brought out her clear blue eyes.

Her hair now a color found in nature, the supermodel emphasized her high cheekbones with an equally understated rose blush.

Evangelista wore her auburn locks pulled back into a ponytail.

As one of the faces of MAC's Viva Glam V, Evangelista attended the launch wearing the universally-flattering lipstick.

Evangelista showed off her grown-out locks at an amfAR gala. 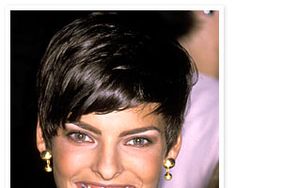