Alba tried out a fun '20s-inspired look for the premiere of Never Been Kissed. She has joked, "When I first started wearing makeup, I went overboard."

The actress landed TV series Dark Angel and wore her hair in a long layered look.

The L'Oreal Feria spokeswoman went ruby-red and "felt like a rock star." She said of the look's bold colored liner: "To me red hair and blue eye shadow looked good at the time."

She starred in Honey and played up her honey highlights with a sleek pompadour.

She sported a deep auburn hue after wrapping Sin City: "I just tend to go for it and have fun with color."

Alba lightened her brows to match her newly-transformed locks. "Jessica's skin is very golden, so we made her a cool blonde," hairstylist Robert Ramos has said of Fantastic Four star.

The Into the Blue beauty for the big chop, wearing her hair in a sleek, sideswept bob.

Alba appeared at the Golden Globes with a voluminous bob.

Alba credited her lush brunette locks to hairstylist Robert Ramos. "I don't know many brunettes besides me who have gone blond then switched back to brown and still have healthy hair," said the Good Luck Chuck lead.

Pregnant with daughter Honor Marie Warren, the Love Guru star rocked a crown of braids for the Academy Awards.

Alba returns to blonde with lightened eyebrows to match her new sunny shade.

Starring in Valentine's Day and the The Killer Inside Me, Alba switched up her look with a layered bob. "It's piecey, not 'done' looking," says her stylist Robert Ramos.

Alba smoldered at a showing of Machete with sexy, rumpled waves.

A low ponytail for a CNN event.

"She had mentioned she wanted a haircut," said the star's hairstylist, Renato Campora. "She didn't know what direction she wanted to go, and this new modern bob was the first style I thought of. We've worked together so long that she really trusts me. I love the way it shows off her neck, but is still long enough for a variety of diverse looks."

Pregnant with her second child, Alba topped off her chic maternity style with glowing skin and loose waves.

The mom of two hosted an event, sporting relaxed waves and purple shadow.

Soft shades of mauve for the Golden Globes.

Alba debuted a sunny shade to reprise her role as the blond Nancy Callahan for Sin City 2. "She's got roots, that Nancy," the star tweeted.

Alba went with a sleek side-ponytail for the Environmental Media Awards.

For the Golden Globes, Alba showed off her sun-kissed complexion in a peach Oscar de la Renta mermaid gown and a brilliant lip shade. Her makeup artist, Lauren Andersen told us, "The dress was the inspiration, I loved the contrast between her glowing skin and the matte orange lip. It's an almost tropical shade that's not an exact match for the dress but close." Andersen chose Hourglass Opaque Rouge Liquid Lipstick in Riviera.

The actress debuts a lob.

Alba swept her honey-hued locks into an undone braid, complementing the 'do's intensity with a raspberry lip.

The actress rocked soft waves which she paired with a bold brow and glittering red eye shadow. 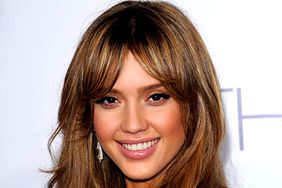