Lopez graduated from Preston High School in the Bronx with big dreams. "I remember watching Rita Moreno in West Side Story and going, 'That's what I want to do. I want to sing and I want to dance and I want to act,'" she has said.

Lopez landed the title role in Selena. "Our styles are very different," she said of playing the singer. "I'm into a more minimalist look. But part of getting into character for me was to look in the mirror and see her face and not my own."

She stole the show at the Grammys in a down-to-there Versace dress. "Sometimes I like to be glamorous and sexy in a Marilyn Monroe type of way," she has said.

On February 22, the superstar gave birth to twins, Max and Emme.

The busy mother of twins went all out for an Inauguration gala with a high-glamour updo, peach gloss and dramatic blue liner.

She freshened up her look with blunt fringe.

Back in full force, Lopez released her seventh album, Love?, and starred in The Back-Up Plan.

Lopez experimented with voluminous curls at the Grammy Awards.

The American Idol judge let her locks flow, telling us: "I'm a Leo, so I need my mane."

For a BAFTA event, Lopez sported a warm, healthy glow.

Lopez worked spiral curls while on tour in support of her latest album.

According to hairstylist Lorenzo Martin, Lopez's deep side part modernized her old Hollywood waves for the Golden Globes. After curling small sections with a one-inch iron, Martin pinned and set each section, waiting 15 minutes before brushing through the curls, parting the hair, and finishing styling spray.

Lopez heated up the red carpet at the Grammys with a sleek top knot and graphic eyeliner.

The singer opts for a messy high ponytail.

Lopez went for a sleek, straight look at a screening of Ice Age: Collision Course, keeping her eye shadow neutral and opting for an icy pink lip. 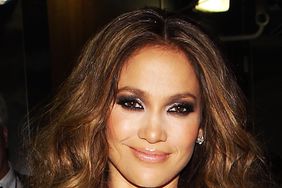