She's pulled off goth queen beauty, red carpet glamour — and everything in between.

Actress, mom, and humanitarian, Angelina Jolie does it all. And whether she's dressed to the nines on the red carpet, taking a leisurely stroll in LA, or tearing up the dance floor at her daughter's college, the Hollywood vet is a sight to be seen. As the daughter of Jon Voight and Marcheline Bertrand, Jolie was destined for greatness. Winning an Oscar at just 24, she has moved us with her imposing talent and let's not forget (okay, how could we?) jaw-dropping beauty.

Keep scrolling as we highlight Angelina Jolie's most memorable beauty moments from the past three decades.

As a student at Beverly Hills High School, Jolie already had a unique sense of style. "I wore black boots with big silver bat [charms] that dragged when I walked," Jolie has said.

The year was 1998 (with blue eyeshadow and glosser and liner lips as proof) and the pixie-cropped actress won her first Golden Globe for TV biopic George Wallace; the following year she would receive a second statuette for her role in Gia.

Jolie went platinum for Girl, Interrupted, but limited her beauty routine to Carmex and lotion.

She won an Academy Award for Girl, Interrupted wearing Morticia Addams-like black extensions and winged eyeliner. A nude lip keeps the focus on her eyes.

The Beyond Borders star, and new mother to adopted son Maddox, lightened up both her locks and makeup for a fresh look. Her pencil-thin brows were so early aughts — and present day.

The glamorous mom-who would expand her brood with daughter Zahara and become pregnant with Shiloh-sported a voluminous '60s-inspired mane and liquid liner to the Mr. and Mrs. Smith premiere.

For the Golden Globes, the A Mighty Heart star (and mom to the newly-adopted Pax) rocked a sleek bouffant updo. "Angelina loves wearing her hair away from her face," hairstylist Ted Gibson has said.

"Her mouth is so large and beautiful," makeup artist Janeen Schreyer has said of the born beauty. "I usually don't color it." Hairstylist Ted Gibson shows similar restraint: "She loves to keep a natural wave in her hair. It's more sensual."

Pregnant with twins Knox and Vivienne, the actress glowed in a high-volume style at the Kung Fu Panda premiere. If you've got fine hair and are looking to feign a thicker mane, invest in some volumizing hair products.

Nominated for her role in The Changeling, Jolie framed her face with an undone updo at the Screen Actors Guild Awards. Slightly volumized hair at the crown and matte pink lips are a nod to the '60s.

For the Cannes Film Festival premiere of Brad Pitt's Inglourious Basterds, Jolie played up her famous lips with a bright red color. Tousled, side-flipped hair keeps this beauty look from looking too overdone.

For the Golden Globes, Jolie played up her incredible lips with a bright crimson hue. Her slicked-back updo is left a little loose, lending a softness to this otherwise bold beauty moment.

The actress attended the world premiere of fiance Brad Pitt's movie World War Z just weeks after she revealed she underwent a preventative double mastectomy. She wowed the crowd in a black, floor-length Saint Laurent gown with her caramel locks in a casual curl.

Jolie brightens up her hair with an auburn hue, but leaves her complexion and lips matte for a nice contrast.

At the Critics' Choice Awards, the star oozed Old Hollywood glamor in soft waves and a silver gown by Atelier Versace. Her full, lengthy lashes open up her eyes — not to mention, have us reaching for our trusty volumizing mascara.

Jolie wore her hair smooth and straight and opted for a pared-down beauty look for the Kung Fu Panda 3 Hollywood premiere at the TCL Chinese Theatre. The result is simple yet stunning.

The actress was back to retro curls and her classic red lip in 2017. A subtle smoky eye makes for an extra sultry finish.

Jolie enhanced her baby blues with graphic liner. Paired with a semi-bouffant hairstyle, she gives off modern-day '60s vibes.

The actress promoted her film Maleficent: Mistress of Evil with a slightly darker hair color and a classic red pout.

At the UK Premiere of The Eternals, Jolie was glowing. Her radiant skin, minimal makeup, and glossy ash-brown hair prove that she is a timeless beauty. 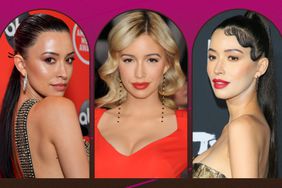