Tracy Anderson Weighs in on J-Lo's Abs: Did She Use Photoshop?

Fitness guru Tracy Anderson has weighed in on today's most pressing topic: Did Jennifer Lopez photoshop her abs? In case you missed this whole controversy (how could you?) we have a lot to catch up on. So, buckle in and familiarize yourself with the last 24 hours in La Vida Lopez.

On Thursday, the "Ain't Your Mama" singer snapped a selfie that showcased her rock-hard abs. Except—according to some people—those ain't J-Lo's real muscles.

Comments quickly began to pour in, with users questioning whether the multi-hyphenate talent had, um, done some work to her Instagram post. Where's your faith in humanity, people?

J-Lo herself was quick to shut down the doubters. In a new post, the singer wrote: "Omg...Just a smudge on the mirror...lol...not Photoshop." She added hashtags, including #gymrat. Well, in case you still have any doubt that the 47-year-old commits to hardcore workouts, her trainer put in a word.

VIDEO: How to Get a Body Like Gwyneth Paltrow

Tracy told WWD: "She’s not one of these performers who think they’re just entitled to a good body and is jumping for all kinds of quick fixes...The real lesson and truth here is she isn’t getting those abs in two moves or with a smoothie. She works out anywhere from three to five days a week with us, depending on her schedule. She doesn’t do anything half-assed.” Clearly!

But, if someone does discover that magical smoothie... call us. 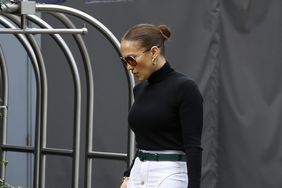