“I went to bed that night thinking that was one of the best days of my life."

Timothée Hal Chalamet, a 24-year-old Capricorn who makes out with famously beautiful women in summertime locales, and also acts, recently opened up about the boat-side paparazzi photos that set the internet ablaze last year.

Allow me to jog your memory: the month was September, the location was Capri, Italy, Chalamet was clutching the railing of the boat he was riding in as then-girlfriend Lily-Rose Depp approached him for a make-out session. The resulting set of photos has both the visual sexual intensity and the awkwardness of one of those couples who save their first kiss for their wedding day.

“I went to bed that night thinking that was one of the best days of my life,” the Dune star told GQ. “I was on this boat all day with someone I really loved, and closing my eyes, I was like, indisputably, ‘That was great.’ And then waking up to all these pictures, and feeling embarrassed, and looking like a real nob? All pale? And then people are like: This is a P.R. stunt. A P.R. stunt?! Do you think I'd want to look like that in front of all of you?!”

Poor Timmy and his dearth of self-tanner. 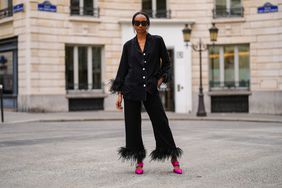