"It was a crazy love affair that ended, as it needed to."

How They Met: There are many rumors surrounding the actors’ introduction — that Sean Penn introduced Thurman to Oldman while the men were shooting State of Grace in 1989; that Thurman was dating State of Grace director Phil Joanou when she met Oldman on set — but there doesn’t appear to be much backing either of these theories. In 2014, Joanou told Filmmaker Magazine that Oldman and Thurman were dating while State of Grace was filming, and “got married right after the movie,” which wrapped in September 1989, according to IMDbPro. That same year, both Thurman and Oldman worked on Henry & June, which was filmed in France.

According to both People and AnOther Magazine, the pair first met in England. Thurman told Vanity Fair that she met Oldman when she was 18, which would have been in 1988 or early 1989.

Oldman divorced his first wife, actress Lesley Manville (with whom he shares a son, Alfie) in 1989. He and Thurman wed the following year.

Why We Loved Them: Thurman and Oldman (the latter, in particular) chafed at the public price of fame, which I assume is why there is so little information available about their time together. Decades later, Oldman complained to Playboy about the mistake he made early in his career of “being overly forthcoming in interviews.”

“Now, because of the internet and all that, people just go to the f—king morgue, open the drawer and write, “Son of welder, once married to Uma Thurman,” he (morbidly) joked. “I’m so tired of it. I sometimes fantasize about sitting down in a situation like this and actually saying, ‘You know, it was all made up. You will never know who my real father was. He wasn’t a f—king welder. I was just having a lark with you all.’” (We’re pretty sure he was actually married to Thurman, though).

When They Peaked: Not for nothing, they knew how to coordinate:

The Breakup: In 1992, less than two years after they wed, Thurman and Oldman went their separate ways.

In retrospect, both actors appear to agree that their union was a mistake. In 1996 Thurman actually used that very term, telling Vanity Fair the marriage was “a mistake,” though she admitted her ex is “a truly great actor.”

“We met when I was 18,” she told the publication. “He was 12 years older. It was a crazy love affair that ended, as it needed to. He was my first love. I had no prior experience.”

For Oldman, who is currently on marriage no. 5, he’s allowed that “relationships are very, very hard.” He joked to Playboy that one of said marriages was “for 10 minutes,” likely alluding to his relationship with Thurman, the shortest of the lot. “I don’t think it meant very much to either of us,” he said.

Thurman, who reportedly once said “Teenage weddings are among the things that don’t count,” would likely agree with Oldman’s assessment.

TBT: Gene Simmons Dated Diana Ross, and Then He Dated Her Sister-in-Law

Oldman married three more times after his split from Thurman — Donya Fiorentino in 1997, Alexandra Edenborough in 2008, and his current wife, Gisele Schmidt, in 2017. He and Fiorentino share two sons: Gulliver, 22, and Charlie, 21.

Oldman has several new projects on the horizon, including The Woman in the Window with Amy Adams.

Next up for the actress is family comedy The War with Grandpa, out this September. 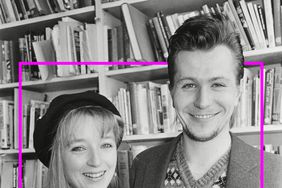