How They Met: The details are unclear, but they were both young, hot, and famous in 1990, which is an exclusive club that probably grants one access to special powers like "intuiting that there are young, hot, famous singles who know all the words to 'Straight Up' in my area."

Why We Loved Them: A picture is worth 1,000 words, and if it's of Paula Abdul and John Stamos, probably several thousand dollars. Imagine just showing up at the Grammys and looking like this. Judging by this Washington Post article from the time, this moment was something of an unveiling for the couple.

In the decades since Abdul and Stamos's split, the latter has been asked about the relationship in a handful of interviews, and on several occasions he's perpetuated a rumor that his ex wrote the song "Cold Hearted" about him. This was of course a joke, but he said it enough times for it to become cultural fact.In a 2015 appearance on Watch What Happens Live with Andy Cohen, Stamos had to clarify to the host that the 1989 song was written before he'd even met Abdul.

When They Peaked: We don't remember, but neither does Stamos.

During an interview on The Ellen DeGeneres Show in 2009, the host asked Stamos if he'd dated the performer, pulling up images of the couple for the studio audience to see. "It's so funny, because I sort of forgot," Stamos began to respond before he caught himself and went on to praise his ex.

"She was so adorable, and she was America's sweetheart," Stamos told DeGeneres. "I had just started Full House during the time and she was the biggest star in the world. People were literally knocking me down to get to her." How rude! "She was great and we had the time of our lives."

The Breakup: According to People, Abdul and Stamos's relationship ended just 7 months after it began. Though the reason hasn't been publicly disclosed, there was another leading man clamoring for Abdul's number — or, rather, using it to repeatedly tell her he was a fan: Emilio Estevez. The Brat Pack member reportedly began calling the singer to "touch base" while she was still dating Stamos. They wed two years later.

Despite Abdul and Stamos's split, the pair have remained friends. They reunited at the Fox upfronts in 2015, even posing for a photo together, which Stamos cheekily captioned "Cold Hearted Snake and America's sweetheart. Together again and it feels so good."

After splitting from Estevez in 1994, Abdul went on to date (and marry) sportswear manufacturer Brad Beckerman. The couple split in 1998 after less than two years of marriage. Abdul's current relationship status is unknown.

Stamos wed actress Rebecca Romjin in 1998 and they divorced in 2005. The Full House star married Caitlin McHugh in 2018 — they welcomed son Billy that same year. 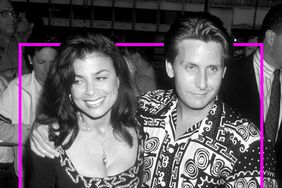