How They Met: The two first met at a Vanity Fair Oscars party in 1997, and quickly became the most famous openly LGBTQ couple in Hollywood at the time.

"I saw Ellen across a crowded room, not knowing anything at all, except that I was just drawn to her," Heche once told Oprah.

Heche recently recalled the whirlwind early days of their relationship, which happened just as DeGeneres came out publicly in a groundbreaking episode of her sitcom, Ellen.

“Ellen and I met on a Sunday night at the Vanity Fair party,” Heche said during an interview on the Irish Goodbye podcast in 2018. “Tuesday was her coming out episode of the Ellen show. Wednesday was the press junket for [my movie] Volcano. Thursday was the opening of Volcano."

She also claimed that the studio, 20th Century Fox, severed ties with her after she took DeGeneres to the premiere of her movie.

“I took Ellen, we were told that my contract for Fox would be [ended] and I would be fired. And that the movie that I had just met Harrison Ford on wouldn’t hire me. And we went to the premiere – these are the stories that I know people don’t know — we went to the premiere, we were tapped on the shoulder, put into her limo in the third act and told that we couldn’t have pictures of us taken at the press junket. And both she and I were fired that week.”

When They Peaked: During their interview with Oprah, in which they held hands and fielded questions about their relationship from both the talk show host and homophobic audience members. Not only were they both out — they were out and in love.

Heche said during the interview that things went "click" when she first laid eyes on DeGeneres.

"Our souls connect[ed], and there's a time when souls come together and they're just meant to be... My soul was meant to be with hers and that's all that matters," she said.

TBT: Sarah Ferguson Addressed Prince Andrew as “Sir” for the First Six Months of Their Relationship

Why We Loved Them: At the time, their high-profile romance was one of the first examples of mainstream LGBTQ representation. "It's exciting not only to be a representation of truth, but [also] of love," Heche had told Oprah.

DeGeneres, however, was initially hesitant about being public about their relationship.

"I didn’t want to hold hands. I had never done that in public," she told LA Times after they broke up. "And yet there was this attitude of, you know, 'You’re going to be on the cover of Time magazine and say you’re gay but you’re not going to hold hands? You deserve to hold hands as much as Tom [Cruise] and Nicole [Kidman]. Or Tom [Hanks] and Rita [Wilson].' So I have to take responsibility for participating in [that]."

Despite those hesitations, it's impossible to deny just how important their relationship was in the scope of public LGBTQ representation — their sit-down with Oprah was the first time many people were seeing an out lesbian couple together.

Plus, it's hard not to love their coordinated outfits and matching cropped haircuts.

The Breakup: Given their highly-public, highly-romantic relationship, the couple shocked friends and fans alike when they broke up. Just ten days before the announcement, People reported, they were seen holding hands and house-hunting in L.A.The two announced their split in a joint statement to New York Daily News in 2000, writing,“It is an amicable parting, and we greatly value the 3½ years we have spent together.”

“It was one of those magical relationships that you feel really honored to be witness to,” said costume designer Julia Caston, who worked with the couple last summer on the March HBO special If These Walls Could Talk 2. “They were completely on the same page.”

The day after the announcement, Heche showed up at the door of a stranger's home in Cantua Creek, Calif., and had an emotional breakdown, requesting a shower and declaring herself God. The homeowner called the authorities, and Heche was hospitalized. In subsequent interviews, she attributed the incident to being abused by her father, which led her to develop multiple personalities. (She revealed in her 2001 memoir Call Me Crazy that she had been sexually abused by her father until the age of 12.)

"I think everything I've done in all my insanity was trying to get my parents to love me," she told Barbara Walters in 2001. "My father loved movie stars. I decided I needed to become famous to get his love. My mother loved Jesus, so I wanted to become Jesus Christ. I wanted to save the world to get her love."

TBT: Cher Thought Ex Tom Cruise Was a "Private Person," Until He Jumped on Oprah's Couch

A year after the breakup, as Heche's memoir began making the rounds, DeGeneres spoke to the LA Times, saying that it was "the first time I’ve had my heart broken, and it was in a big way."

"She walked out the door and I haven’t spoken to her since, I don’t have the answers," she said. "I would love to have them myself. I would ask all of the questions that everyone else wants to ask ... I’m left with everybody else wondering what happened. I don’t know."

Where They Are Now: After their split, DeGeneres had a relationship with Alexandra Hedison until 2004. The two posed for the cover of Advocate magazine together, but split up before the issue was released. Since 2004, DeGeneres has been in a relationship with Portia de Rossi, and the two married in 2008. She's also, of course, been hosting her talk show The Ellen DeGeneres Show since 2003.

After she and DeGeneres broke up, Heche began dating Coleman Laffoon, a cameraman she met on the Ellen show. They eventually married, but filed for divorce in 2007. The two share a son, Homer, born in 2002.

Following the divorce, Heche began dating her Men in Trees co-star, James Tupper. Their son, Atlas Heche Tupper, was born in March 2009, and the two separated in 2018.

Heche has also starred in shows like Nip/Tuck, Quantico, and Chicago P.D, and can be seen in the upcoming movies Hour of Lead and Salvage. 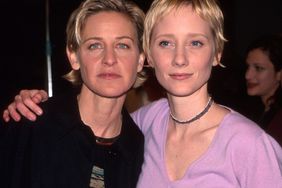