How They Met: Unlike most women who were in their teens and early twenties during the dawn of Dawson's Creek, Kruger was not an adoring fan of Jackson's before she met him — in fact, she wasn't exactly a fan after she met him, either.

Jackson told Us Weekly that his first date with the German actress was "a miserable one," thanks to a dangerous cocktail of allergens and nerves.

"I took her to an Italian restaurant, and there was some flower that was blooming. She was allergic to it so she sniffled and sneezed the entire time," he explained.

"And when I get nervous, you might have noticed I talk a lot," Jackson went on. "So I just chewed her ear off for an hour and a half … It was amazing. I'm surprised she ever called back."

Kruger told Conan host Conan O'Brien that she wasn't even aware that she and Jackson were going on a date on that fateful evening in 2006, as his invitation had been unclear.

"He thinks he asked me out on a date, which is not true, because I did not agree to that. I agreed to have drinks with him," she said. "I actually had plans with someone else for dinner, so I know I didn't say yes to dinner. We were sitting at the bar, and it's nine o'clock, and I'm ready to leave. And he was like, 'Let's go, we have dinner reservations.' And I felt really bad because he looked very eager and he put on a clean shirt. And so I was like, 'OK, fine. Let's go.'"

Kruger thought her allergies might cut the date short, but alas …

"I thought he might say, 'Let's call it a day. I'll bring you home,'" she remembered. "And of course not. He talked about himself for an hour and a half. Nonstop."

Oh and it gets worse.

"He took me back to my hotel in his car, which was a piece of shit," she went on. "Excuse me, but it was. The door was eaten by his dog, it smelled so bad. If you know Josh, you know he was not the tidiest of guys, so trust me, it was not cute."

And, after all that, he still went in for a kiss. "I swear to God, at the end, I was like 'Should I slap him?'" Kruger admitted.

Jackson's post-date save, however, was impeccable. The next day he sent her flowers … with a box of Kleenex.

By the end of 2006, the ambiguity was gone and Jackson and Kruger were establishing themselves as a red carpet mainstay.

Within a couple years, the couple's unique attitude toward marriage became the media's focus. Kruger, who'd previously been married to director Guillaume Canet, explained (repeatedly) that she and Jackson didn't equate marriage with commitment. "No paper you have signed will keep you around," she told Allure in 2010.

Two years later, Jackson told Us Weekly, "Marriage is important for the people it's important for, but neither one of us is particularly religious, so I don't think there's any particular push." But, like any good media-trained person in the public eye, he kept the door open, adding, "But never say never! I don't know."

TBT: Olivia Munn Asked Aaron Rodgers "So What Do You Do?" When She Met Him

Why We Loved Them: Given Kruger's background as a model and her omnipresence at fashion week, it was only natural that Jackson up his style game.

"When you are in a relationship, you want the other person to appreciate the things you like," Kruger told Glamour of Jackson's sartorial transformation. "It sounds superficial, but it's nice."

And, naturally, that comes with sacrifice.

"I used to have a collection of Adidas sneakers, but one day all the obnoxiously colored ones disappeared," Jackson told Glamour in a separate interview. "[Diane] still claims I must have lost them 'somewhere.'"

In 2015, Jackson praised Kruger for her confidence and how she channels that into her style, telling The Hollywood Reporter, "One of the most attractive things to me about Diane is how confident she is in herself as a woman and in her beauty, and how much self-respect she has and the way that manifests itself in the way she dresses." Joshua!

He acknowledged that he'd learned a thing or two from her through the years, too. "I certainly pay more attention to how I dress now than I did a decade ago before we started dating," he said.

Jackson also proved that he could be of assistance in a fashion emergency when Kruger attended what is arguably the world's most red carpet-driven film festival: Cannes. For closing night in 2012, the Inglourious Basterds star opted for a glamorous Dior gown complete with a massive hoop skirt that took her an hour to put on and threatened to never come off.

"Once I finished dinner, I had to go to the bathroom, and it became so tight that I couldn't breathe anymore," Kruger told People. "Josh had to come with me to the lady's room and cut me out of it," she went on. "He literally had to help me remove the dress to help me go to the bathroom. It was crazy!"

"That's real love, isn't it," she told the publication, "to have someone like him help me in the weirdest situations. He's great and he's like my hero."

When They Peaked: Jackson and Kruger's relationship was (by all public accounts) a retelling of the movie Four Christmases: modern couple who prioritizes international travel over marriage finds themselves ensnared in ~quirky~ familial ~hijinks~.

Such was the case when Kruger introduced Jackson to her German mother.

Kruger, who said she'd only bring men to meet her mother if the relationship was "somewhat serious," explained to Jimmy Kimmel that it's German tradition to have coffee and cake when you return home. When Jackson visited, Kruger stressed the importance of this ritual.

"I said, 'You have to have cake. You have to have coffee. Even if you don't like it.' He has a nut allergy. It had almonds in it. I was like, 'You're eating it. You're definitely doing it.' And so he did."

Um, what is up with this couple's casual disregard for the danger of allergic reactions?

Anyway, things were going well and ostensibly no EpiPens had been deployed, when Kruger's mother brought over a folder filled with clippings of Jackson — like, 5th grade collage-crafting style.

Included in this dossier was Jackson's 2002 mugshot (!) that the actor earned after "drunkenly assaulting a security guard" at a hockey game in Raleigh, N.C.

Kruger was not amused by her mother's stunt.

"She thought it would be cute to go, 'So I see you've been arrested in 1997 at the hockey game.' And says, 'Whose fault was it?'" Diane added. "We were there for three days, we did not speak for two. It was not good."

Mortifying as that sounds, you've got to admit that's some grade-A rom-com material …

The Breakup: In July 2016, People reported that Jackson and Kruger had split after 10 years together, with little detail given other than that they "remain friends."

The following year, Kruger told Vulture that her split from Jackson had been "a long time coming," noting that they'd broken up months before it was public knowledge. "You don't break up overnight after ten years," she added.

"It wasn't like an urgent, 'Oh my god, I can't sleep at night' thing," she said of the process. Instead, "it felt liberating," she continued, "because I didn't have to worry about that anymore, so I could immerse myself 100 percent into something else."

Kruger and Walking Dead star Norman Reedus welcomed a daughter in 2018. Despite Kruger's previous declarations about marriage, she and Reedus are currently engaged.

The actress's latest, action thriller The 355, opened in theaters Jan. 7. 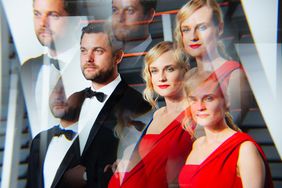 In Diane Kruger and Joshua Jackson's Split, I Was Always Rooting for Pacey