How They Met: The A-listers initially met in the summer of 1985 at Madonna and Sean Penn's Malibu wedding. Their paths crossed again just a few months later when they both visited the White House to claim an Outstanding Learning Disabled Achiever Award from First Lady Nancy Reagan. "A bunch of people who were dyslexic were invited to the White House, and Tom and I are both dyslexic," Cher explained decades later. "We didn't go out till way later, but there definitely was a connection there," she continued.

Why We Loved Them: Naturally, we didn't know they were ever together until about 20 years after the fact — but that's also sort of why we love them. Without the advent of social media and camera phones, it was obviously easier to keep celebrity relationships on the DL, but even so, can you imagine the mental gymnastics it took for two of the biggest stars in the world to date — nay, LIVE. TOGETHER. — and not alert the media?

Considering the media spectacle that was Cruise and Katie Holmes's whirlwind romance (aka TomKat), Cher herself seemed a bit confused by how differently the Risky Business star approached their own relationship. In 2008 she told Entertainment Tonight, "It was a long, long time ago and neither one of us ever talked about it and I don't know why. When we were together he was such a private person. He always has been until lately. He didn't mention it and I didn't mention it. I loved him though, he was amazing. Now it's hard for me to look at this person and this press. How many times can I watch him jumping up and down on Oprah's couch?"

When They Peaked: The year was 2013, the day June 27. Cher, whose storied romantic history includes essentially every man belonging to the highest echelon of fame between 1960 and 1990, revealed on an episode of Watch What Happens Live that Cruise was among her "top five" lovers.

"It was pretty hot and heavy for a little minute," she told host Andy Cohen in an additional feature from the episode. "The person that I knew was a great, lovable guy."

Cher gushed over the Mission Impossible star during an interview with Oprah Winfrey in 2008 as well. "I was so crazy about him," she told the talk show host. "He was so wonderful … And he was so, like, different. He was a shy boy."

The Breakup: The stars' relationship appears to have been much more serious than the rumor mill had originally let on. After Oprah asked about their "date," Cher cleared things up, telling her, "that was a long date — I lived in his apartment." That being said, they couldn't have been together for more than a few months.

Cher told ET that they split due to conflicting schedules. "It was after Risky Business and right before The Color of Money. I couldn't go to Chicago and that was kind of the straw that broke the camel's back," she explained. The Color of Money began shooting in Chicago in January of 1986 — Cruise and Cher's White House rendezvous had happened in October, 1985.

TBT: JFK Jr. and Daryl Hannah's Relationship Reached a Breaking Point Because of Her Dog

Had they remained together, it seems there would've been more than busy shooting schedules standing between them. "I don't get what he does, that whole Scientology thing," she said in an interview last fall.

Things ended amicably between the two, and they even shared a sweet on-camera reunion at the "Love Rocks" concert on Valentine's Day in 2002.

Shortly after splitting from Cher, Cruise wed actress Mimi Rogers. Their marriage was brief, and he married second wife Nicole Kidman in 1990, the same year his divorce was finalized. Kidman and Cruise, who share two adult children (Isabella, 26, and Connor, 24), split early in the new millennium. He and Katie Holmes welcomed daughter Suri in 2006 and wed eight months later. They announced their divorce in the summer of 2012.

Cruise has several projects coming up, including Top Gun reboot Top Gun: Maverick and the seventh and eighth installments in the Mission Impossible franchise.

VIDEO: Cher's Career Through the Years

Cher's currently closing out the U.S. leg of her ABBA-themed Here We Go Again tour. 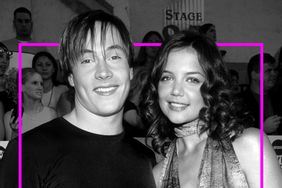