"When the person you’re with asks you to marry him, you think: This must be happening because it’s supposed to.”

How They Met: Bush and Murray became acquainted on the set of their long-running teen drama, One Tree Hill. The show premiered in the fall of 2003 and Murray proposed to Bush in Australia the following spring (he was there to film the seminal 2005 classic House of Wax).

"I woke up one day and I said this is the woman I want to spend the rest of my life with," Murray said during an MTV segment about his proposal.

The actor decorated his 18th floor penthouse with 500 candles and strung his building's tennis court with lights spelling out "I love u" so Bush could read the message from the apartment's balcony. He proposed with a 2-carat ring with pink argyle diamonds native to Australia.

"That was probably the most nerve-wracking thing I've ever done in my life," he said on camera. "I thought to myself, if she says no I've got 18 floors to jump."

They wed in April 2005 in a beachfront ceremony in Santa Monica, Calif.

Why We Loved Them: If you were a teen or tween in the early 2000s (and Team Brooke, of course), the union of Bush and Murray (aka OTH's Brooke and Lucas) was everything. Love is real; TV is real; The WB is young Hollywood's best matchmaker. It was a fever dream that felt designed specifically for the mid-puberty set.

TBT: Sheryl Crow Said Breaking Up With Lance Armstrong Was "Like a Death"

When They Peaked: While the relationship clearly wasn't built to last, it did seem like Bush and Murray were passionate about each other.

Murray described his then-fiancée as his "cool breeze," explaining, "she's wonderful, she's kind, she's intelligent, and she makes me happy."

In a different interview, Murray said his bride-to-be "complements me very well," citing their respective lifestyles. "She's a neat freak, and I'm dirty. I can't help it. I wrestle with the dogs every day. We watch football on the weekends and keep our life to ourselves."

The Breakup: Five months after the wedding, Bush and Murray split. Cheating rumors circulated and Bush asked for an annulment on the grounds of "fraud."

A reported friend of the actress's told People, "Sophia went into the marriage believing in the sanctity of marriage, and Chad simply did not share that vision."

"This is a difficult and unfortunate situation," Bush said of the separation. "I am glad this is being resolved sooner rather than later."

Though it seems Bush's request was denied, by the end of 2006 the co-stars were divorced.

TBT: Nick Cannon Is "Almost 100% Sure" He Introduced Kim Kardashian and Kanye West

But, unfortunately, the end of the marriage did not coincide with the end of One Tree Hill. The series for which both actors were best known went on for another six years, though Murray exited in 2009.

"At the end of the day, we're grownups," Bush said of working with her ex during an episode of Watch What Happens Live with Andy Cohen in 2014, "and I actually think it's interesting that when people split in a way that's unpleasant, they usually just go on quite literally hating each other - or the person in my situation hates the other person, whatever - but when you have to work with somebody for another half a decade, you kind of have to deal with it. Because for me, at the end of the day, my job is my priority," she went on. "And so I think at the end of it, it really let me just let go of it."

Bush, who had rarely spoken publicly about the split at this point, also said she and Murray "were two stupid kids who had no business being in a relationship in the first place."

In 2017, Bush wrote an essay about her love life for Cosmopolitan. Without referencing Murray by name, the actress revealed she had doubts when it came to accepting her co-star's proposal.

"I wasn't looking for a relationship, but one found me and became serious, even though I hadn't planned to settle down until my 30s," she wrote. "But when the person you're with asks you to marry him, you think: This must be happening because it's supposed to."

"The reality is that, yes, it was a massive event in my life," she went on. "And the trauma of it was amplified by how public it became, which was incredibly foreign and bizarre to a girl who'd been just another college kid 24 months before her life blew up."

The following year, Bush told Cohen that marrying Murray "was not a thing I actually really wanted to do." When Cohen questioned how one is talked into such a concept, she explained that her OTH superiors played a role in her decision.

"Because how do you let everybody down … when you have bosses telling you that you're the only person who gets a person to work on time and 200 people either get to see their kids at night or they don't because our days start on time."

Though Bush later clarified that she was "making fun of MYSELF" with her comments, Murray still felt compelled to weigh in.

He began with a shady Pinocchio GIF, unsubtly implying that Bush was a liar. Then came a statement from his rep, calling Bush's claims "ludicrous" and clarifying that "Chad conducts himself in a completely professional manner and would never marry for any reason but love."

"Thirteen years since his divorce from Sophia, he has a very happy family life with his wife and children," Murray's team continued. "He has completely moved on and doesn't feel the need to engage in this type of behavior."

Well that last part doesn't exactly line up with the Pinocchio GIF, but OK.

Later that year, Bush told Dax Shepard that OTH's producers were "really deeply inappropriate" to both her and Murray during the breakup. "They ran TV ads about it," she claimed. "It was really ugly."

Speaking to the relationship itself, Bush told the Armchair Expert host that a lot of factors were at play."

"Being a super nerdy kid and suddenly you're on TV and all this stuff is happening and one of the cool people you work with thinks you're awesome, there's really base brain stuff there," she said. "I think that for me, it took me a long time to do the kind of inventory you're talking about in the after effect. And I continued to be in a place of work with my ex."

Next up for the star is Hulu's fertility horror flick False Positive. 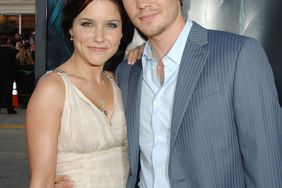 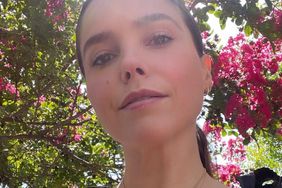