And gave fans a peek at her very special stationery.

She may be spending some time re-recording most of her entire catalog, but Taylor Swift is still taking time to make her fans feel very, very special. The latest is Georgia flight nurse Britta Thomason, who received a special care package from Swift after she was interviewed by The Telegraph. During her chat, Thomason mentioned that she was a Swiftie and word got back to Taylor herself, who thanked Thomason for working so hard during the COVID-19 pandemic.

Thomason shared photos of the letter and some swag from Swift, including a water bottle, guitar pics, a T-shirt, and more.

"Dear Britta, I wanted to write to you and personally thank you for serving on the front lines of this pandemic and for being brave enough to put yourself in danger to help others. I am so inspired by your passion for helping and caring for your patients and I was so touched that you mentioned liking my music recently!" Swift wrote. "I've sent you some cozy clothes for when you're off duty. "I'll be thinking about you, and forever grateful! Love, Taylor."

Thomason's photos showed off more than just the gifts, however. The included letter was written on official Taylor Swift letterhead, which notes that Swift is a "songwriter/feline enthusiast."

"I've always seen videos of her fans opening packages she sent them but never did I EVER think I would be one of them!" Thomason wrote on Facebook. "I'm not one to fangirl about anything, but if you know me, you know I'm a Swiftie! Don't mind me ... I'll be crying the rest of the day. Taylor, thank you!"

Swift hasn't been shy about her generosity — and neither have her fans. Katy Perry showed off a gift to her daughter, Daisy, that Swift sent to welcome the new arrival. She also donated $13,000 to two moms back in December 2020. She even helped out her pal Gigi Hadid during her pregnancy with a very well-received bagel delivery. 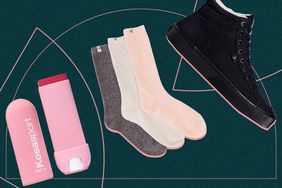 I'm a Shopping Expert, and These Are 10 Things I'll Be Using (and Wearing) All Winter