Taylor Swift just took the idea of "Friendsgiving" to a whole new level. The singer is well known for having one of Hollywood's most impressive squads, and this Thanksgiving she invited a few of her BFFs to her Rhode Island home for the holiday. Naturally, the celebration was brimming with amazing Instagram posts.

In a caption of a photo with Lily Donaldson, Swift stated "Thankful for piggy back rides," as she playfully took a trip on the supermodel's back—both women dressed in chic hats and coats.

And another supermodel was in attendance: none other than Martha Hunt. In a photo with her, which Swift inscribed "Thanksgiving cuddles", she and the equally beautiful blonde embraced one another in a sweet hug.

And what's a gathering of friends without trying the mannequin challenge trend? Swift staged hers on the beach, where the players posed calmly before erupting into a total dance party as the beat dropped.

We couldn't think of a more epic way to spend the holidays! 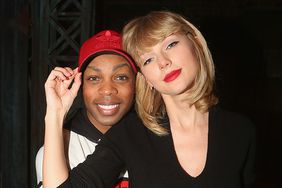